We Need to Allow Racists to Be Racists, Not Hide Their Agenda 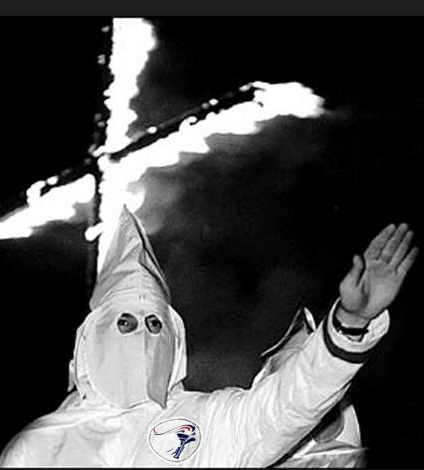 This week, everyone was shocked, shocked I tell you, to discover that there were/are overt racists hiding within the GOP.  Without sounding flippant, big, fat, hairy, deal.  There are racist every.  Everyone is bigoted – about something. I don’t mind admitting I’m not a fan of the French and French culture.  Call me a bigot if you want.  I’m basically a Brit with a sensible Brit’s utter and complete disdain of anything French.  (It’s a product of at least a thousand years of selective inbreeding, especially when one considers my family tree is a good 75% Norman).

Part of being honest with ourselves is admitting that we all have the nasty little bigot proclivities hiding within us.  We hide that bigotry with a thin veneer of politeness and manners.  When those manners break down, and we can no longer hide who and what we are, society points its finger at us, and we make fools of ourselves.

Maybe we’re going wrong by hiding who and what we are.  There are certain norms of society that must be observed.  No one in their rational mind goes around spouting hatred towards others.  But, when we hide who we are, and our agendas, we are basically not only lying to others, but to ourselves. If someone is going about their daily lives, maybe that’s okay, but when a person is entrenched in their racism and bigotry to the point where they have a hidden agenda, it is disgusting.

Racism and bigotry, while ugly, can also be dangerous.  The sport’s world is currently in an uproar because the owner of the Clippers told his girlfriend he did not want her bringing black people to his ball games.  He has been known to make other nasty remarks like that, while MLB suspended the late owner of the Reds, Marge Schott for making racist remarks against black and Jewish people.  The difference is the owner of the Clippers, Donald Sterling, has never been reprehended for his remarks and Schott was.

Should she have been?

There is a fairly nasty article at the New American by William F. Jasper.  I will provide the URL, but I don’t like linking to them. (http://www.thenewamerican.com/usnews/item/18136-is-cliven-bundy-a-racist-where-s-the-proof).  The article stress how Alan Keyes thinks that Cliven Bundy wasn’t racist.  There are references to World Net Daily, which in itself is a total joke.  What is important here, is to understand that Jasper is the editor of the extreme right, and extremely racist New American.  He began life working for the John Birch Society.   It is also important to understand that the very magazine defending Cliven Bundy’s racism, The New American, is the official publican of the John Birch Society.  Fred Koch, father of Charles & David was one of the founders of the John Birch Society.  Fred Koch was very much against desegregation.

“…Charges of racism and anti-Semitism have dogged the John Birch Society since its earliest days. It opposed civil rights legislation in the 1960s, saying the African-American freedom movement was being manipulated from Moscow with the goal of creating a “Soviet Negro Republic” in the Southern United States. The society was a close ally of Alabama’s segregationist governer George Wallace and reportedly had 100 chapters in and around Birmingham, Alabama’s largest city, as well as chapters across the rest of the state. Thompson, the group’s CEO, said the society has never been either racist or anti-Semitic, going so far as to add that once a member is discovered to harbor such views he or she is immediately “booted out.’’…One of the society’s first members and major backers was Fred Koch, a multimillionaire businessman, who left a fortunate to his sons. David and Charles Koch have become the billionaire sugar daddies of today’s American right….”

They gloss over Cliven Bundy’s obvious hatred of anyone black by saying he is an elderly man who just says what the thinks.  Cliven Bundy was born in 1946.  That does NOT make him elderly. That makes him 68 years old.  I bet he’s not turning down his Medicare. To excuse his overt racism as ‘elderly’ ramblings is a lie.

Bundy is the perfect example of everything a racist should be, and why they should be allowed to wear their racism on their sleeve, open, exposed, for everyone to see.  It is almost amusing, and extremely revealing to see how those supporting people like Bundy react when something nasty about them is exposed.  Instead of being able to admit they are wrong, like Allah Pundit (someone who doesn’t have the courage to use his/her own name) they hide behind verbal vomit.   The verbal vomit is how this arch conservative tries to explain that liberals and conservatives view racism differently, that conservatives have far better values when dealing with racism than do liberals.  That alone is terribly revealing. Instead of being able to openly condemn what is truly a disgusting view of life, Allah Pundit spews forth a truly strange explanation of why it is okay for conservatives to be ‘racists’ and liberals don’t understand values.

“…Conservatives largely see racism as racial hatred, treating people as groups rather than individuals and then displaying animus toward members of those groups. Discrimination is deliberately treating individuals differently on the basis of race.

Liberals tend to see racism as a desire to preserve a socioeconomic structure that grew out of slavery and segregation, maintaining a privileged status for some and a disadvantaged status for others. Discrimination is anything that has a negative disparate impact on protected minorities.

There is an element of truth to the liberal view. Obviously, the effects of slavery and an impoverishing racial caste system are going to linger for generations. The descendants of those victimized by human bondage or Jim Crow are going to inherit less social and economic capital than those who were not victimized.

And while a plausible case can be made be made that more recent phenomena—like the decline of marriage and the nuclear family in large parts of the black community or the disappearance of work in many communities—do more than racism to perpetuate this inequality today, these things cannot be hermetically sealed off from the injustices of the past….”

When a person is so dedicated to a specific world view, and is incapable of comprehending that something is right and something is wrong – or refuses to admit it, then that person almost has a hole inside them.  Right is right and wrong is wrong.  Yes, a person should be allowed to hate.  Yes, hate destroys them.  But, we need to see that hatred, out in front, to know how to assess their agenda.

It is important to note that Vdare, one of the leading white supremacist sites, has/ and still does, post, verbatim, Michelle Malkin’s column on a weekly basis.  She has made no move, over the years to denounce them, ignoring the fact that Peter Brimelow’s identical twin brother, John was once the leader of one of the national socialist groups.  (That’s Nazi, FYI).

“...The ideology of White supremacy that Miller embraced has historically been intertwined with the use of institutional violence, from the genocide of Native Americans and American slavery to the lynchings of African-Americans. The Ku Klux Klan, often aided by local police, resisted the Civil Rights Movement with intimidation and murder. But even after the battle to defend segregation was lost and most Southern police agencies distanced themselves from the Klan, White separatist and supremacist groups have continued the open use of violence—only now without institutional backing—against religious, racial, and sexual minorities.

In recent decades, White nationalists moved from being pro-government, patriotic Americans—in the 1940s, one could support Jim Crow segregation at home and still fight the Nazis abroad—to being anti-system, right-wing revolutionaries. Bolstered by the Nazi skinhead subculture that exploded in the 1980s, this change from pro- to anti-system helped foster an ongoing culture of extreme violence. For such a small political movement, its members commit a fantastic number of violent criminal acts, which have included political assassinations, murders in public and domestic settings, and bombings which seek to inflict mass casualties. All of this is a microcosm of the violence praised by the historic fascist movement and its philosophical valorization of the “act”—as well as its practice of “total war” and racial genocide.

Miller played a central role in this shift towards revolutionary Far Right militancy. Originally a member of the White nationalist National States Rights Party, he later joined the neo-Nazi National Socialist Party of America, with whom he took part in the Greensboro Massacre of five left-wing, anti-racist protestors. He then formed the Carolina Ku Klux Klan, which morphed into the White Patriot Party (WPP), described by Leonard Zeskind as a “hybrid organization [which] grafted uniformed paramilitarism and Naziesque ideology onto its roots as a white-robed Klan group.”* This was part of what is called the “Nazification of the Klan,” when Nazi and Klan groups overcame historical divisions and grew closer in ideology and collaboration….”

The cover photo I used for this piece is a vile image.  But, it is one that needs to stay within the national conversation.   It needs to be a part of our culture in that what it represents may never be allowed to fester and grow.  Those who support it should be allowed to openly espouse and promote their agenda.  It is the only way we can truly know just who they are, and how to avoid them.

What if our greatest mistake was requiring people to hide their hatred?  If we were to allow such hatred to be expressed, out in the open, at times, maybe the world could grasp the fact that the libertarian agenda promoted by the Tea Parties, Charles & David Koch, Ron Paul, Rand Paul, Sean Hannity, Glenn Beck, David Barton, Rush Limbaugh, Eric Cruz, Paul Ryan, and so forth and so on, is inherently racist.  It might not make that much difference, but it might deter a few people who were still honest in what they believe from making a huge mistake that might haunt them – forever.

At least Cliven Bundy has the courage to say what he believes, in public, on national television. Too bad the rest of them don’t.

RSS feed for this post (comments)
Previous Post« Just When You Think the Bigot Has Sung His Swan Song….?
Next PostJust When You Thought It Was Safe Not to Mention Bundy »
The Pink Flamingo
Bombax Theme designed by itx
﻿﻿﻿﻿﻿
WordPress SEO fine-tune by Meta SEO Pack from Poradnik Webmastera