We Interrupt This Series…For Yet More About the Bundy Ranch 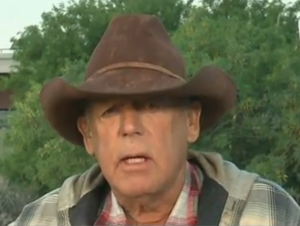 NOTE:  The series I’m doing on Christian Reconstruction, with at least 2 additional parts about modesty will resume in several days.  When you see Wednesday’s post, you will understand.

For years I’ve been telling you that trouble is brewing in this country.  It has nothing to do with the far left, which is batsh*t crazy, either.  We all know that there is, unfortunately, the potential for a civil war, brewing in this country, a product of the extreme right, not the extreme left.  Contrary to protests from the right, FOX, Rush, Sean, Glenn, and so forth and so on, hate is alive and well, and very much a very very big business, augmented by all you can buy ammunition. It’s rather like an all you can eat buffet bar, only just slightly less lethal.

We all knew it was only a matter of time before some seriously unhinged individual would begin taking idiots like Alex Jones, Glenn Beck, and the insanity promoted by groups like the Sovereign Citizens seriously.  Last week, in Cummings, Georgia, Dennis Marx, drove his SUV up to the county courthouse.  He was allegedly wearing a bullet proof vest, and had explosives.  Deputy Daniel Rush was hot in the leg by Marx.  Marx was then taken out by law enforcement officials.

Don’t get me wrong, I like a good conspiracy theory as much as the next fairly  normal, fairly well adjusted person.  But, one needs to know when to draw the line and face reality.  People like Alex Jones don’t help matters when they tell their loser audience that murderers like Jerad and Amanda Miller were in a situation that was staged by Harry Reid and so forth and so on.

I’ve also been telling you that the incident at the Bundy Ranch was a disaster in the making.  The only reason there was on shooting is because the Attorney General is a heck of a lot cooler and smarter than a bunch of hot-heads egged on by the likes of Sean Hannity, FOX News, Rush Limbaugh, and so forth and so on.  The Millers were there at the Bundy Ranch, waiting for a shooting war.  They did not get it.

What is even worse, it is reported that they were kicked off the Bundy Ranch for being too crazy, but no one bothered letting the cops know about it.  Instead, we hear from those on the right, making statements like now the left gets the far right killers they’ve been wanting. I have news for the extremes on the right.  We’ve been dealing with far right terrorists for several years, now.

Make no mistake, the Millers were terrorists.  Unfortunately, I fear we are going to discover they aren’t the only ones out there.  They are part of the militia and patriot movement.  According to my sources, there are tens of thousands of far right, racist, unbalanced, and well-armed Millers out there, just waiting to start killing more and more in law enforcement and more and more innocent individuals.

They are being aided by the rhetoric of the tea parties, libertarians, John Birch Society, Stormfront, and numerous other groups who have their own agenda.  Let’s be honest here.  Their agenda is not good for this country.  Two decent men were murdered in cold blood, leaving at least a half-dozen children without their father.  When do the extremists of the right start taking responsibility for the monsters they are creating.  One wonders if the so-called patriots who were at the Bundy Ranch, and were concerned by the Millers, might also have a little bit of responsibility in all of this?  Someone could have picked up the phone and called the cops, letting them know that the Millers were even too scary and too crazy – for them.  But, that would have required admitting that maybe they weren’t the be all and end all in the world.

Reporting people like the Millers required some basic human decency.  One of Cliven Bundy’s son says that they were asked, to leave, but is that to CYOA?  If the Millers were asked to leave the Bundy Ranch, why is there footage of them?

How many more innocent people must die before the nation realizes how dangerous a situation we are facing?