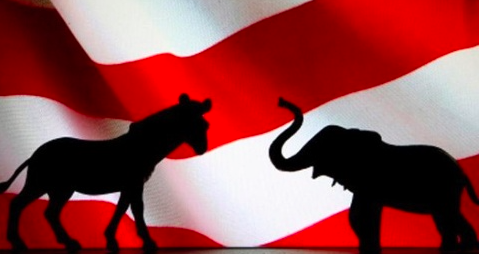 “…Congress shall make no law respecting an establishment of religion, or prohibiting the free exercise thereof; or abridging the freedom of speech, or of the press; or the right of the people peaceably to assemble, and to petition the Government for a redress of grievances…”

This is the kind of thing you don’t want to be writing on the eve of the Fourth of July.  Then again, maybe it’s the best time to write it.  The past couple of weeks, I’ve been on a binge, dealing with a miserable theme.  Our First Amendment rights are under fire, not from the right, which is where everyone claims the chill will be, but from the freedom loving left.  They are so determined to make things easy, and not to allow anything unpleasant to be said, that they are destroying our freedom of speech.

No, I’m not supporting or endorsing Donald Trump.  There is a reason, though, why he is getting a heck of a lot of attention.  It isn’t what he is saying, but the fact that he is saying things that are unpleasant.  Unpleasant things need to be said, no matter how annoying or distasteful they are.  Someone needs to say it.  I’m finding it to be a bit refreshing.  I would find it refreshing if it were a Democrat saying them.

I’ve been writing about and talking about immigration for nearly a decade.  One of the real problems is that it is difficult to find numbers which haven’t been tainted by the Tanton machine.  They are everywhere, like evil little trolls.  The bottom line is that women are being raped as they make the harrowing journey to what should be a better life.  According to the Huffington Post, something like 80% of Central American women and girls are raped as they migrate to the US.  Darn, but The Donald is right?  The man is being castigated and turned into a stupid monster because he called men who rape women criminals?  If they are migrating through Central America and Mexico, and 80% of them are being raped, en route, doesn’t that indicate that they are being raped by people from that region? 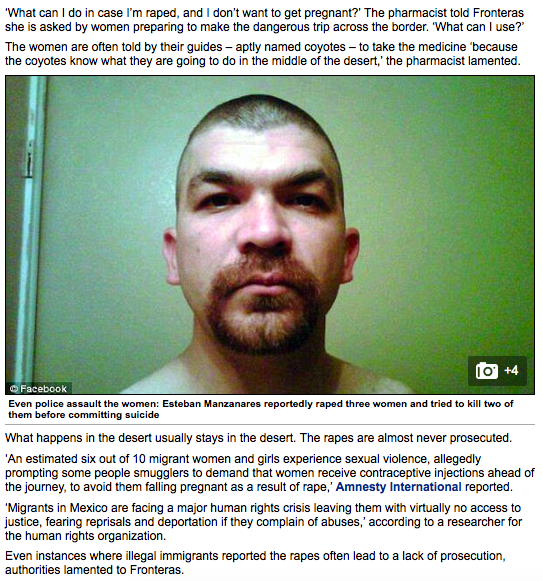 Mexico is a nightmare of drug trafficking.  Anyone who says it isn’t is lying.  Women who are raped, and traveling through Mexico, have little chance of justice.  Yet, when Trump has mentioned this, and called rapists criminals, he’s being damned for speaking his mind.  He is telling the truth, factual accuracy.

‘An estimated six out of 10 migrant women and girls experience sexual violence, allegedly prompting some people smugglers to demand that women receive contraceptive injections ahead of the journey, to avoid them falling pregnant as a result of rape,’ Amnesty International reported.

‘Migrants in Mexico are facing a major human rights crisis leaving them with virtually no access to justice, fearing reprisals and deportation if they complain of abuses,’ according to a researcher for the human rights organization. Even instances where illegal immigrants reported the rapes often lead to a lack of prosecution, authorities lamented to Fronteras….”

I don’t get this.  Chris Christie says that Trump is hurting the GOP with what he is saying.  Don’t women’s lives matter, even if they are from Central America, have no power, aren’t rich enough to buy lobbyists, and will never vote in this country?  If the GOP were smart, they have a huge opening here.  Evidently the issue isn’t something the liberals want to face.  If so, then some very unpleasant truths about Obama’s immigration policies must be faced.  His deportation rate is staggering.  The detention centers are nightmares.  At least George W. Bush tried to make things better for people, but this is disgusting.

Women’s lives matter.  It doesn’t matter.  I’m still absolutely shocked at that 80% rate.   Mexico is pissed with Trump.  They’re not prosecuting the rapists.  They aren’t making any effort to protect these women.  Fact is, Mexico treats illegal immigrants who are passing through, like dirt.  Mexico has a horrible human rights record when it comes to women in difficult situations.  Just look at the murders in Juarez and you can understand.

Two things are going on here.  For some strange reason, the powers that be don’t want Trump shooting his mouth off about the 80% rape rate.  They would rather shut him up, and deny his First Amendment rights, turn him into a fiasco than to investigate and report on what is happening here.  No one wants to do that.  Neither party will come out looking all that good.

Just for speaking his mind, Macy is dumping Trump.  Serta is dumping him.  The whole world, apparently is dumping the man, out to destroy him, for exercising his First Amendment right.  What shocks and disturbs me is that liberals don’t seem to cherish freedom of speech, on the surface, if their comfort zone is disturbed.  Right now, I could care less about Donald Trump.  What bothers me is that the man picked up on the very latest statistics and he’s being damned about it.  I don’t support his immigration views.  He’s painting himself as a hard-liner, and anyone who has followed my writing for the past decade knows I’m far from it.

BUT… I don’t even think he knew what he stepped in when he insulted the crime rate in Mexico.  And, no, he blew it with the status quo far right Tanton machine numbers portraying illegal migrants as criminals.  They are far from it.  They are men and women who want a better life for themselves and their families.  One of the reason women are fleeing Central America is to keep from being raped, and worse.  On their way to alleged freedom – and it isn’t – not under the Obama Administration – 80% of them are raped.  The numbers are staggering.  They should spark outrage, not at the messenger, but at the source of the rapes.  But, instead, the messenger, the egotistical messenger who needs the Hair Club for Men, hit a very raw nerve with Mexico.

Contrary to how it is being presented, Mexico has a very serious problem. Hundreds of young women in Juarez have gone missing and/or have been murdered.  Basically nothing is being done about it.  Juarez has one the highest murder rates in the world.  And, most of the spill-over crime is drug related.  The spill-over crime rate is so high, so deadly, there are roads in New Mexico and Arizona no one in their right mind now travels.  It is too dangerous.  Ten years ago, there was no problem traveling them.  Not so, today.  I’ve been looking at property in Hereford, Arizona.  There are gorgeous places for sale.  But, they are too close to the border.  I would be terrified to live in them, and I know the score in this part of the world.

Right now, I don’t get this.  If I were conservative, I’d be complaining.  If I were a liberal, I’d be up in arms over the way women are being treated.  That 80% number is staggering.  But, because Donald Trump said it, well, just shoot the messenger.