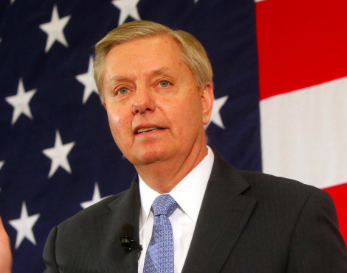 There is a very good reason Donald Trump attacked Lindsey, on Tuesday, in South Carolina.  There are several very good reasons he did.  Amazingly, the pontificating media and punditry have no earthly idea why Trump did, what he did, when he did, and where he did. First, he was in a part of South Carolina where Lindsey’s support is the shakiest.  Secondly, the people who are supporting Trump despise both John McCain and Lindsey.  He was preaching to the audience.  What he did was coldly calculated.  Don’t ever think it was ‘off the cuff’.  It wasn’t.

Trump is playing to the libertarian, tea party base.  He’s not playing to the religious base, but the tea party base.  For a long time, we’ve thought they were separate but equal.  Don’t ever think his campaign is a joke or, as I suspect, his numbers will not take a dip.  Someone has done some remarkable marketing research.  I don’t like it, but I’m impressed.  He’s about a crazy as Ulysses was when he harnessed himself to a plow and pretended he was a ox to get out of going to Troy to rescue fair Helen.  To make further use of the metaphor, Trump is the GOP’s Trojan Horse.

Right now, Trump is making a play for the libertarian, anti-immigration, racist, bigoted, anti-Hispanic crowd.  They were once the libertarian fringe, but now they’ve basically taken over the GOP.  When you start factoring in Scott Walker and his libertarian prostitution to the Brother’s Koch, along with Rand Paul, you understand why Republicans like moi no longer fit in the GOP.

What we do know according to previous years, whoever is on top today, will probably be on the bottom a year from now.  No, Trump won’t be the nominee.  Neither will Sanders.  Both are playing the clown-card ‘comic’ relief, to divert attention from he/she who will be the nominee.  Contrary to popular opinion, it’s better for them to stay in the background right now, and let the eventual losers shoot themselves in their feet, one toe at a time.

We don’t know who the GOP nominee is going to be.  It won’t be Trump.  I doubt very seriously if it will be Cruz, Paul, Huckabee, Carson, Walker, or Christie.  We can eliminate Jindal, Santorum, and maybe even Rubio. Frankly, I think Lindsey has a better chance getting the nomination than Trump.

What I fear is, if Trump has done his marketing research, the GOP base is now libertarian.  Those of us who are traditional Republicans are no longer needed nor wanted.  I’m certainly not comfortable as a Democrat.  I wish we had a real option, and the lousy libertarians would crawl back up under the floorboard like the filthy roaches they are, and quit lying about who and what they are.  But, libertarians are basically dishonest, so don’t expect anything else out of them.

If we still had a normal Republican Party, any candidate who trashed a war hero like John McCain would be slithering back to hell, where they belong.  Had a true GOP candidate done what Trump did to Lindsey today, they would have been forced to atone for their sins.  Right now, the only ‘real’ Republicans we have running are Lindsey, Jeb, John Kasich, and Rick Perry. The rest are pretenders.

If you check out the far right on Twitter, they are applauding what Trump did to Lindsey today.  It makes sense, they’ve always hate Lindsey.  If you want my personal opinion, that’s one of the best endorsements a person can receive, being hated by the far right, libertarian, tea party types.   Right now, I’ seething.  I guess that’s why I didn’t want Lindsey running in the first place.  He’s too good for this shit.  My father always called it casting pearls before the swine.  I think that explains Trump, perfectly – swine.

If all else fails, make fun of the Donald.  His ego is so great, he can’t stand ridicule.