The Koch Based Attack on the Pope 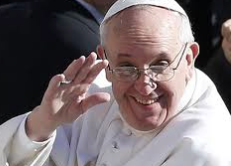 “…“The Koch brothers are billionaire industrialists who fund organizations that advance public policies that directly contradict Catholic teaching on a range of moral issues from economic justice to environmental stewardship. As you well know, Catholic social teaching articulates a positive role for government, an indispensable role for unions, just tax policies, and the need for prudent regulation of financial markets in service of the common good. …While the Koch brothers lobby for sweeping deregulation of industries and markets, Pope Francis has criticized trickle-down economic theories, and insists on the need for stronger oversight of global financial markets to protect workers from what he calls ‘the dictatorship of an economy which is faceless and lacking any truly humane goal.’”…”

There are a few of us who have seen this one coming.  It is rather obvious that Pope Francis has struck a nerve, going to the very heart of what many of us have considered the abject evil corruption of the far libertarian right. We’re dealing with a party, a group of primarily men, billionaires who are so perverted in their will to control the entire country, that they are willing to destroy or purchase anyone who gets in their way.  The Pope is in their way.  They are going to do everything they possibly can to destroy him.  Anyone who knows their agenda and has followed them has known this was coming.

“…“While the earnings of a minority are growing exponentially, so too is the gap separating the majority from the prosperity enjoyed by those happy few. This imbalance is the result of ideologies which defend the absolute autonomy of the marketplace and financial speculation. Consequently, they reject the right of states, charged with vigilance for the common good, to exercise any form of control. A new tyranny is thus born, invisible and often virtual, which unilaterally and relentlessly imposes its own laws and rules. Debt and the accumulation of interest also make it difficult for countries to realize the potential of their own economies and keep citizens from enjoying their real purchasing power. To all this we can add widespread corruption and self-serving tax evasion, which have taken on worldwide dimensions. The thirst for power and possessions knows no limits. In this system, which tends to devour everything which stands in the way of increased profits, whatever is fragile, like the environment, is defenseless before the interests of a deified market, which become the only rule.”…” Pope Francis, attacking tax evasion by the wealthy, raw capitalism, and the interests of the rich over the environment, Evangelii Gaudium, November 2013

According to Rush Limbaugh, what is going on in the Catholic Church is redistribution.  Okay, so he’s repeating the same old, same old, yada yada yada.  It would be nothing but more vomit of verbiage from a man who claims to be a Christian, but has apparently managed to, like the rest of the far right world, managed to forget that as a Christian, we worship Christ, not Ayn Rand.

“... Let me tell you what happened to Catholic Church, and it’s not just me opining here.  This has been the opinion of several learned historians.  You can take it back, actually, to the New Deal.  Once the Catholic Church was able to equate Big Government income redistribution with charity, it became an automatic supporter.  Because the church, any church, all churches, are in large part about charity, about helping the underprivileged, the poor, the hungry, the homeless, the thirsty, you name it. …”

I would basically treat this as yet another FYI on how the far right, under the the heresy of Christian Reconstructionism,  has managed to forget that Christ was not exactly complementary about the ultra wealthy.  After all, he once said it was easier to get a camel through the eye of a needle (a gate in the wall of Jerusalem) than it was for a rich man to get into heaven.  We now live in a world where a young man can basically murder four people while driving drunk and claim that he is so rich, he doesn’t understand the rules for the little people of the world  – and get away with murder.  We live in a world where one of the most affluent counties in the country has a massive homeless problem, the money to do something about it, and does nothing.

Well, now it seems there is a method to Rush Limbaugh’s madness, and it has nothing to do with Christ, or Pope Francis and everything to do with the Koch Brothers.  It seems that Charles Koch Foundation recently donated a million bucks to the Catholic University, for the school’s economics department.  Aside from the old ‘there goes the neighborhood’ comment, it should be noted that this is how they start worming their way into various institutions such as Florida State and George Mason University.  They also have poured a tremendous amount of money into Clemson, which explains why a source has been telling me how abjectly corrupt it has become.  The Kochs corrupt everything they touch.

“...The bishops who sit on Catholic University’s board have increasingly moved away from the church’s focus on social justice and aligned with more conservative political elements. The US Conference of Catholic Bishops has pulled back funding for anti-poverty groups that have been caught working in coalitions that included gay-rights advocates, for instance, and it’s cracked down on nuns who supported President Obama’s health care reform initiative. Catholic University would never take a donation from Planned Parenthood or a foundation that promoted abortion rights, but it doesn’t see a problem with taking Koch money….”

Now, they are trying to effect the Catholic Church.  I guess they should try, they own everything else, including the GOP, most of the state houses in the country, most GOP governors, and just about everything else.

“…A spokesperson told America Magazine that the signers of the letter “seek to instruct The Catholic University of America’s leaders about Catholic social teaching, and do so in a manner that redefines the church’s teaching to suit their own political preferences. “…”

In other words, this quote should read that the Koch Brothers are trying to further put a wedge in the conservative Catholic Church in the US, to create either a schism in the church, or to attempt to force Pope Francis to shut up when he slams the ultra wealthy like Charles & David Koch.   At least there are those within the university who understand exactly what the two men are up to.

“…“Both Pope Francis and Pope Emeritus Benedict XVI have raised ethical and moral questions about global financial markets, and emphasize the need for preparing business leaders to not simply serve a profit motive but to serve the common good.

“While we understand the challenges of starting a business school during a time of fiscal constraints and restrained philanthropic and government funding, we must raise our serious concerns about a recent $1 million gift the university has accepted from the Charles Koch Foundation. Given the troubling track record the foundation has in making gifts to universities that in some cases include unacceptable meddling in academic content and the hiring process of faculty, we urge you to be more transparent about the details of this grant.”…”

Over the past few weeks, it has been quite obvious that the Koch Brothers, via their control over the right and the GOP are trying to bully Pope Francis into shutting up about what the teachings of Christ are all about.  They have used Rush Limbaugh to be his most vile and outrageous in his attacks. The attacks have also come from FOX News, and the usual far right sources. 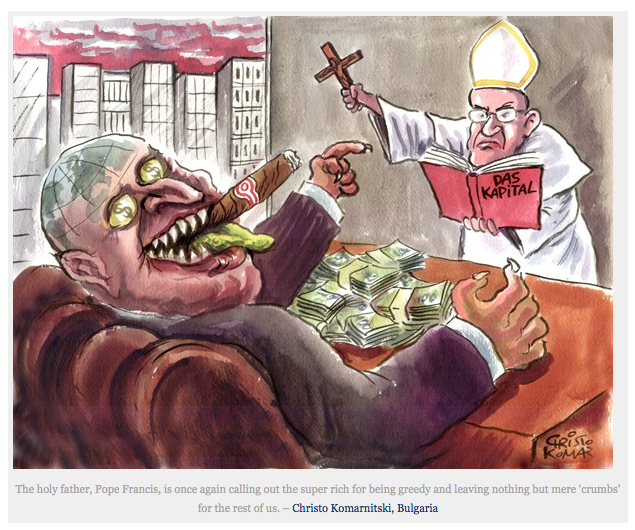 As if to prove his point the Holy Father basically fired conservative Cardinal Raymond Burke from the Congregation of Bishops. Cardinal Burke was the one who said that Nancy Pelosi should not be allowed to take communion because of her stand on abortion.

“...Cardinals Burke and Rigali represent different types of problems. Burke is the consummate culture warrior and he has encouraged the appointment of men to prominent sees who, like himself, look out at the world and see nothing but dread, who have bought into a narrative in which all the Church’s problems and challenges are someone else’s fault, and that the Gospel is best preached from a defensive crouch, with finger wagging at any and all who do not see the world as they do. I cannot think of a single churchmen who is less like Pope Francis, and the difference goes far beyond Cardinal Burke’s penchant for the cappa magna. Those of us who were disappointed by the appointments in San Francisco and Portland, Oregon, and Denver and, most recently, Hartford, could discern the influence of Cardinal Burke – and behind him Cardinals Harvey and Law – in those appointments….”

This is a very big fat hairy deal, basically telling the conservative clergy to get out of the anti-abortion hate business.  It’s not going to go over very well.  He’s taking out the culture warrior conservatives in the US, along with those who aren’t handling the sex abuse problem very well.

“…“In ideologies there is not Jesus: in his tenderness, his love, his meekness. And ideologies are rigid, always. Of every sign: rigid. And when a Christian becomes a disciple of the ideology, he has lost the faith: he is no longer a disciple of Jesus, he is a disciple of this attitude of thought… For this reason Jesus said to them: ‘You have taken away the key of knowledge.’ The knowledge of Jesus is transformed into an ideological and also moralistic knowledge, because these close the door with many requirements. The faith becomes ideology and ideology frightens, ideology chases away the people, distances, distances the people and distances of the Church of the people. But it is a serious illness, this of ideological Christians. It is an illness, but it is not new, eh?”…” ~Pope Francis, taking aim at ideologically obsessed Christians, October 2013

It is rather obvious, considering the way Pope Francis basically thumbed at the far right in this country, with his weekend remarks about Marxism and charity.  He has proven he is far more knowledge on these subjects than Rush Limbaugh and his other attackers.  But, that doesn’t really matter.  What matters is the man must now be destroyed.  He is making life a bit uncomfortable for the Koch Brothers.

There is something terribly sick about their agenda and the fact that they are now so all-power, omnipotent, and abjectly rich, James Bond Super Villain rich that they are now going to attempt to rewrite 200o years of Church history.  It’s working in this country, with their little pawns on the right.  I’m thinking they are now up against someone they finally can’t corrupt.