The High Cost of Honor and Greatness

Because it is The Pink Flamingo’s birthday, I am going to indulge myself.  The other night I was watching Tombstone.  (Yea, this is yet another “Why I love Wyatt Earp…”).  Even having watched the movie so many times, something struck me that I’d not noticed.

The perfect definition of honor:

When a person of honor does something that requires personal strength and character, something difficult that the average person would shrink from doing, that person is usually criticized.  Those of lesser character would like nothing better than to swoop in and destroy. The most perfect example of this The Pink Flamingo knows is the life of Wyatt Earp. 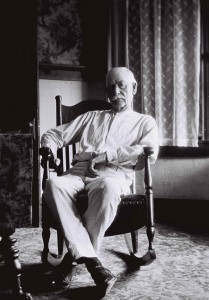 Wyatt Earp basically gave up his entire future to do what was right. This 1923 photo is my favorite.  It shows a man, brave, courageous, and bold – one unafraid, unflinching, and was willing to face the consequences.

Have you ever noticed how difficult someone of honor has in today’s world.  All one needs to do is look at the way conservatives have treated George W. Bush or Lindsey Graham if they want an example.  In order to achieve greatness, a man or a woman must have honor. They must also have the long lost qualities of chivalry, which is the combination of qualities expected of an ideal knight, esp courage, honour, justice, and a readiness to help the weak.

“…1 a : good name or public esteem : reputation b : a showing of usually merited respect : recognition <pay honor to our founder> 2 : privilege <had the honor of joining the captain for dinner> 3 : a person of superior standing —now used especially as a title for a holder of high office <if Your Honor please> 4 : one whose worth brings respect or fame : credit <an honor to the profession>… 8 a : a keen sense of ethical conduct : integrity <wouldn’t do it as a matter of honor> b : one’s word given as a guarantee of performance <on my honor, I will be there> synonyms honor, homage, reverence, deference mean respect and esteem shown to another.

Our politically correct society cannot allow men and women of honor to exist.

Far right conservatives cannot allow men and women of honor to exist because of the unwanted comparisons to their pathetic limitations and lack of personal courage and integrity.  There is one other reason men and women of  honor must be basically destroyed today – the way both the right and left seeks to destroy the reputations of George W. Bush and Lindsey Graham.

“…Christianity also influenced chivalry through the Crusades. The Crusades were military expeditions undertaken by Christian knights to recapture from Muslim control the holy places of pilgrimage in Palestine, or the Holy Land. Although many knights enlisted in search of financial gain, military glory, and adventure, many were also moved by genuine religious enthusiasm. This enthusiasm was reflected in the founding of the military religious orders-the Knights Templar, the Teutonic Knights, and the Hospitalers. The members of these orders took religious vows and shared a common vision of recapturing the Holy Land for Christianity. They believed that knighthood could be a holy form of life when used for Christian purposes. These ordershelped infuse chivalry with religious idealism….”

Those who aspire to greatness can only achieve it if they have honor.  If they lack honor, they are simply famous.  Bill Clinton is famous.  Ronald Reagan is great.  George W. Bush is great.  Lindsey is great.  Barack Obama is a celebrity.  He will never achieve the greatness John McCain already has.  So has Newt.

Honor is the difference between George Washington and Benedict Arnold.  It’s that simple.

People like Glenn Beck, Lou Dobbs, and Rush Limbaugh may be famous, but they will never be touched with greatness.

In order to have honor one must have courage.  One must have the strength of one’s convictions, and not be afraid of doing something that isn’t popular.  It is the ability to act without taking a poll, and be willing to suffer the consequences of one’s actions.

It was said that Brutus was the noblest Roman of them all.