People Still Have a Right to Be Jerks 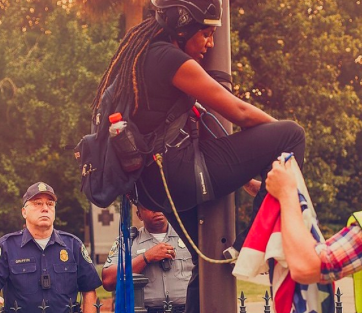 When Bree Newsome scaled the flagpole on the grounds of the South Carolina capitol, she committed a felony.  Her felony was hailed by most as a moment of freedom where she defied the evil racists of South Carolina to remove a vile symbol of oppression.  Never mind she committed a felony in the process.  Never mind, due to her self promoting narcissism, she completely ruined a ‘moment’ where the state was coming together to do something we’ve been trying to get them to do since the mid-1980s. She transformed a moment which was about state finally getting its act together to all about Bree Newsome and how God told her to fight for freedom.   Yes, she has a God-given right to be a total and completely narcissistic self-serving jerk.  As for the felony, she’s a freedom fighter.  People are throwing money at her.  She’s making the rounds, promoting Bree Newsome.  That’s okay.  Just don’t mistake what she did as ‘freedom fighting’.

Fairly early Tuesday, the SPLC featured a tweet exposing an (alleged) 84-year-old man in Alabama who has a shop where he sells Civil War, Confederate and KKK merchandise.  The tweet was worded in such a way as to make one think he was violating some law or something.  Featured in the article was a comment by a woman who said she was offended when she went into his store.  No one forced her to go into his store.  Frankly, if indeed the man is 84, and he was a senior citizen in my family, I would be ready to shred not only the SPLC but the newspaper who went after him.

First, there are some things you do and don’t do.  When a person is elderly, you don’t set out to destroy them.  Secondly, it is a private business. No one is making a person patronize him.  He has a right to have a private business and be a total jerk. He does though, not have a right to refuse to bake a wedding came for a LGBT couple, if he is in the state of Oregon.

We are living in what appears to be an era of rapidly eroding views of what freedom is.  Unless a person is breaking a law, like Bree Newsome did, that person has a right to do with they want.  Unless they are breaking local, state, or national laws, then they have a right to sell, do, and say what they want.  People have a right to express themselves.  Unfortunately, evidently people must only say what is politically correct.   It is now racist for a white family to send their child to a private school. The PGA is moving an event from one of Donald Trump’s courses after he said what he said about immigration.  This is rather ironic.  I seem to remember, not long ago, they refused to even bother sanctioning the home of the most important golf tournament in the world, which refused to allow women members until 2012.  Evidently one still should not be Hispanic if applying for membership.

I gather only certain people now have rights, in certain situations.  This being said, Bree Newsome broke the law.  The jerk in Alabama who is being castigated didn’t break any law other than being a jerk.  Funny how things work in this world, today.  It is ironic how our society today values people, especially the far left.  If a cop guns down someone who is minority, who may or may not be involved in a crime, if that cop is white, they are turned into monsters.  Some of them deserve to be turned into monsters.  That young male, and it is almost always male, is turned into a martyr.  Black lives matter.  Yet, if a small boy, who happens to be black, is gunned down by a gang member, looking to kill the child’s father, absolutely nothing is said.  Do some black lives matter more than others?  I’m just asking.  Are black lives who are taken by white monsters have a greater societal value than those who are caught up in gang violence in Chicago?

No, we’re no longer all the same.  The narrative has changed, and people have changed with it. It is rather obvious that some lives are more important than other.  Some people, evidently, are more deserving of freedom and their rights, especially if they are part of the proper narrative. If you aren’t, in today’s America, left or right, you will be destroyed, and no one gives a damn.  As long as you do the right thing, say the right thing, and know the secret hand-shake, code words, and present yourself as a soldier for the cause, you can do what Bree Newsome did, and get away with it.