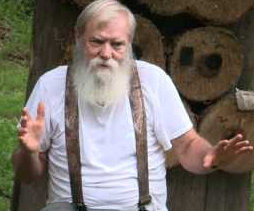 Voddie Baucham, that godly associate of now disgraced Doug Phillips says that shyness in a young child is a sin. Parents should basically beat the you know what out of a self-centered toddler who might rightfully be afraid of an intimidating stranger. His answer for sealing with a selfish child is to spank them, and spank them often.

Michael Pearl advocates that an infant, who is nursing, and might make things uncomfortable for his/her mother, should have his/her hair pulled as the first form of discipline, to begin training them. When one considers that an infant’s brain is still forming, this is disturbing, on so many levels.

On May 12, 2011, Hana Alemu died. Born in 1997, in Ethopia, she was adopted by godly followers of Michael Pearl, in 2008. She survived their living hell for nearly three years before their abuse murdered her. On February 6, 2010 Lydia Schatz, a 7 year old adopted from Liberia, was ‘trained’ to death by her new parents. They were also devotees of Michael and Debi Pearl. In 2006, Sean Paddock was trained to death by parents who were devoted to the Pearls. The adopted child was only four years old. In Germany, members of the Free Evangelical churches practice the same kind of training. 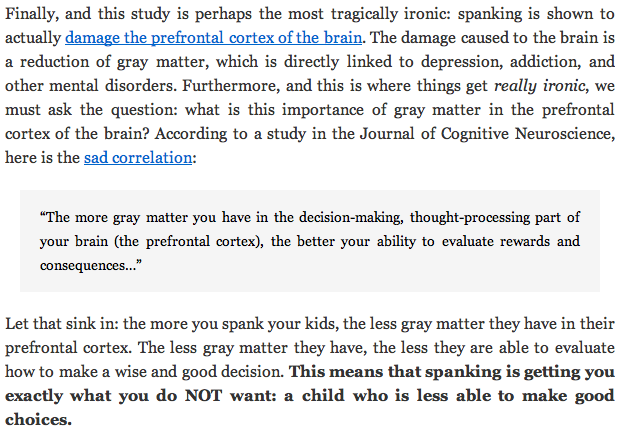 Victoria Strong is a woman who grew up in a fundamental home. Her godly parents used James Dobson’s book, The Strong Willed Child, to make her life a living hell. Dobson’s book, along with others, is a recipe for abuse, godly abuse, but it is still abuse.

“…So that is why I’m reviewing this book. I need to know what it says. I need some answers as to why my parents seemed to hate me so much. Why they were constantly angry with me. Why I was beaten with belts, punched in the stomach, slammed into walls, slapped across the face, and berated constantly, all in the name of tough love, the Bible, and most often, “Dr. Dobson says…”. Why I was never permitted to tell my side of the story or explain myself. Why they always, always, always assumed the worst about me. I need to know. I need to heal. So without further adieu, let’s dig in, shall we?…”

“...Studies are showing and continue to show that the opposite is in fact true. Physical punishment (hitting, spanking, switching, belting, smacking, etc.) has been shown to retard the growth of grey matter in the brain, potentially decreasing intelligence and even increasing the risk of mental illness. Spanking causes increased aggression and devalues both parent and child….” 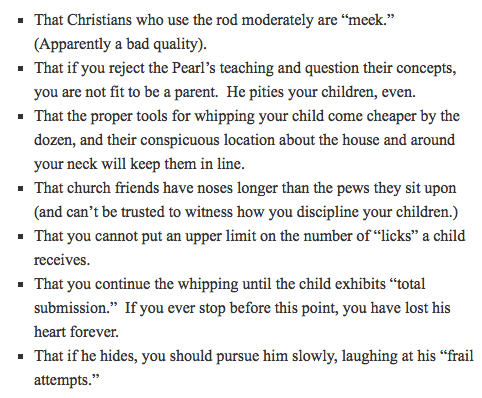 As much as I detest football, and would not hesitate to castigate the game for anything, I can’t fault the viciousness of football for what Adrian Peterson did to his 4 year old son. Unfortunately, what he did is almost directly out of the Michael Pearl play book. Unfortunately, this day and age, this type of punishment has become almost the norm for for the extreme religious right. Also, unfortunately, the media is incapable of recognizing what is going on here. What Peterson did is textbook. It should also be noted that Peterson is part of a fairly conservative Baptist congregation. They’re the ones who adore Michael Pearl.

“…Pearl’s methods include making children who are challenged with potty training take cold baths, denying food to disobedient children, and whipping them with quarter-inch plumbing line. Pearl sees nothing wrong with applying his techniques to infants. One expert recently denounced Pearl’s techniques as interfering with child development. Most alarming, some children have been seriously abused by adults who were followers of Pearl. Three children have been killed….” 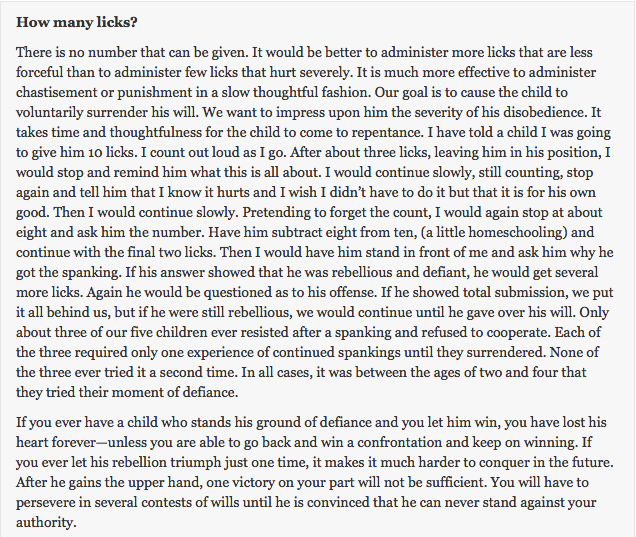 Why Not Train Up a Child

“…The “whooping” – as Peterson put it when interviewed by police – occurred in Spring, Texas, in May. Peterson’s son had pushed another one of Peterson’s children off of a motorbike video game. As punishment, Peterson grabbed a tree branch – which he consistently referred to as a “switch” – removed the leaves and struck the child repeatedly.

The beating allegedly resulted in numerous injuries to the child, including cuts and bruises to the child’s back, buttocks, ankles, legs and scrotum, along with defensive wounds to the child’s hands. Peterson then texted the boy’s mother, saying that one wound in particular would make her “mad at me about his leg. I got kinda good wit the tail end of the switch.”

Peterson also allegedly said via text message to the child’s mother that he “felt bad after the fact when I notice the switch was wrapping around hitting I (sic) thigh” and also acknowledged the injury to the child’s scrotum in a text message, saying, “Got him in nuts once I noticed. But I felt so bad, n I’m all tearing that butt up when needed! I start putting them in timeout. N save the whooping for needed memories!”…”

The Pearls are a power industry among the far religious right. Michael’s Book, To Train Up A Child has sold well over a million copies. Activists in the UK have managed to get Amazon to stop selling it there, but it having no success. If Pearl’s book were the only one, it would be one thing, but there are several other nasty child-rearing tomes on the market. The fundamental, home schooling industry has made physical abuse a hallmark of ‘success’.

This is Adrian Peterson’s world. It is populated by men, godly men such as Voddie Baucham, who advocate serious discipline of a disobedient child. Their version of things is basically to whip the sin out of them, with either a branch or a piece of plastic tubing. The truly alarming part is that Peterson is not an exception to the ‘norm’.

“…Adrian Peterson’s stepfather is a pastor at a Baptist church in East Texas. When AP was growing up, he attended his stepfather’s Cedar Branch Missionary Baptist Church in Grapeland, and his concept of negative and positive thinking is firmly rooted in a biblical language of good and evil. “The devil is always at work,” AP says. “He’s going to shoot those darts no matter what. I feel like a lot of people, they give up when the devil is shooting those thoughts and stuff in their mind. He alters what God has planned for ‘em. They’re never able to get back on track and refocus on those things. So in that instance, the devil kind of won. So during that time immediately after surgery, when I couldn’t ride a bike or squat down, that’s when he was really at work with me. You’re not going to be back stronger than you were. You’re not going to be as fast. You’re never going to be the same.”

Christianity is intimately woven into football culture, of course, but religion seems like an even more natural partner with recovery from orthopedic surgery. The undeniable advantage of faith-based thinking is that you don’t need proof that it’s working, and healing from a catastrophic joint injury takes such a long time and your progress isn’t readily apparent as you’re going through it. Even so, Peterson’s faith doesn’t seem to be blind: It seems like another muscle Peterson has diligently sculpted over time into a very impressive physique. It’s a trusted formula: God has always overcome the devil, adversity has always been followed by redemption. He lost his brother, but eventually his mother stopped crying and expanded the family; his father was incarcerated for laundering crack money,2 but he was released and now he comes to all of Peterson’s games whether home or away; Peterson was arrested in a Houston nightclub for disorderly conduct last summer, but this winter the grand jury dropped the charges;3 last December he tore his ACL, but this December he leads the NFL in rushing.

“It dates back to when I lost my brother when I was 7,” he says. “Different things that I’ve been through, different situations that I’ve been through in my life, praying to God and asking him to give me the strength and the faith and the courage, just whatever it takes to get through the situation. I’ve learned by applying those principles that things work out for me. So I’ve just been staying true to it.”…”

It is the world of many on the religious right, including the august James Dobson.

There are those who may be more horrified over the abuse of a small dog than the advocated abuse of a small child. In this country, we have a tendency to treat our animals better than we treat helpless children. The world of Bill Gothard is huge, his political connections all-important, making him (still) one of the most powerful men in the history of this country. His character training techniques were monstrous. 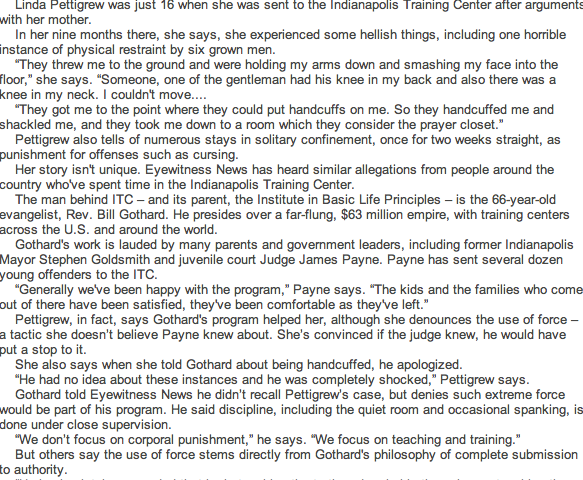