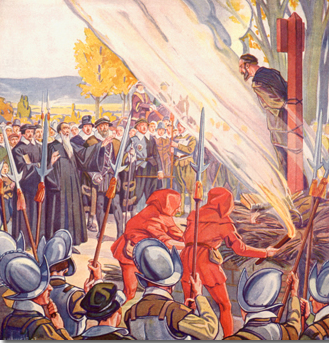 The problem with Christian Reconstruction, etc. is the fact that it is part of a neo-Puritian movement. Just like the Puritans of old, today’s neo-Puritian is a monster. Granted, I am highly prejudiced against John Calvin, who was a psychopath.  I am a genealogist, having spent nearly 3 decades and countless hours (far too many) doing research into my family history.  The top cause of death, on both sides of the family, when discounting old age, is death by battle, execution (as a witch), or beheading for treason – at the hand of Puritans. One side of the family were staunch Royalists and suffered – tremendously – at the hands of Oliver Cromwell, who was one of the great monsters of history.  That’s the problem.  Calvinism has a nasty tendency of producing monsters.

“…Calvin, whose political influence grew enormously in Geneva from 1546 to 1564, imposed severe penalties on those who would return to Catholicism, not attend his sermons or speak a word against his doctrines or his person. Even Protestant authors, such as J.B. Galiffé, acknowledge the despotism of Calvin:

“For years people were obliged to report in minute detail every word spoken against him and the doctrine of predestination, with which he identified himself to such a degree that to speak against the dogma became as dangerous as to speak against him. The poor were dragged to prisons, scourged, reviled, obliged to walk in the streets barefoot wearing a penitential habit and carrying a torch to expiate for what Calvin arbitrarily called blasphemies.”…”

While numerous ancestors were Puritians in this country, and I greatly admire their social contributions to our modern world, I loath their religious practices.  I agree with the fact that they did not believe in sacramental marriage, that it should be a civil and legal contract, and the fact that they believed divorce should be easily obtained, as was remarriage after divorce.  I highly approve of the way they prevented child abuse and had very few instances of incest or pedophilia.  The original Puritians were not into patriarchy.  They believed in women’s rights.  They were against slavery.  The empowered women, believed in a strong public educational system, and thought that girls were to be educated equal to boys, in co-educational schools.  Everything today’s godly fake puritan teaches is completely contrary to what the originals were, socially.

“...The Puritan was not a sufferer, but an aggressor. He was the straitest of his sect. He was an unflinching egotist, who regarded himself as his “brother’s keeper,” and was continually busied in watching and guiding him. His constant business seemed to be to save his fellowmen from sin, error, and eternal punishment. He sat in judgment upon their belief and actions with the authority of a God-chosen high-priest. He would not allow a Jesuit or a Roman Catholic priest to live in the colony. His motives were pure, his aims lofty, but his methods were uncharitable and sometimes absurd. As a law-giver and magistrate, his statute-books exhibit the salient points in his character—a self-constituted censor and a conservator of the moral and spiritual destiny of his fellow-mortals. His laws in those statute-books were largely sumptuary in their character. He imposed a fine upon every woman who should cut her hair like that of a man. He forbade all gaming for amusement or gain, and would not allow cards or dice to be introduced into the colony. He fined families whose young women did not spin as much flax or wool daily as the selectmen had required of them. He forbade all persons to run, or even walk, “except reverently to and from church,” on Sunday; and he doomed a burglar, because he committed a crime on that sacred day, to have one of his ears cut off. He commanded John Wedgewood to be put in the stocks for being in the company of drunkards. Thomas Pitt was severely whipped for ” suspicion of slander, idleness, and stubbornness.” He admonished Captain Lovell to ” take heed of light carriage.” Josias Plaistowe stole four baskets of corn from the Indians, and he was ordered to return to them eight baskets, to be fined £5, and thereafter to ” be called by the name of Josias, and not Mr. Plaistowe, as formerly.” He directed his grand-jurors to admonish those who wore apparel too costly for their incomes, and, if they did not heed the warning, to fine them; and in 1646 he placed on the statute-books of Massachusetts a law which imposed the penalty of flogging for kissing a woman in the street, even by way of honest salute. He rigidly enforced this law 100 years after its enactment, because it was not repealed.

Unfortunately, today’s version of what a great Christian nation should be is based on Calvinism, with John Calvin being next to the Almighty.  There’s a problem with this.   Calvin was basically a monster.  He was a psychopath.

“…Others were still more unfortunate and had to pay with their lives for the crime of opposing the tyrant of Geneva. For having accused Calvin of being a heretic, Jacques Gruet was tortured and beheaded in 1547. Spanish physician Miguel Servet was sent to the flames for having censured the opinions of the master; he asked for a lawyer but this right was denied to him. Italian Valentino Gentile was condemned to a similar penalty but was forgiven after he humbly repented. Later, however, he was beheaded in Berne by the Swiss Protestants there.

It is horrifying to review the many criminal processes in Geneva during the autocratic reign of “this tyrant priest who submitted Geneva to the most infamous servitude,” Galiffé continues. He reports that the number of judgments by public tribunals normally made in one year in the city “was easily surpassed in a single month or even a week under the rule of Calvin. Often there were many of these spectacles in a single day.” Further on, he affirms that “two years of Calvin’s government produced 414 criminal processes. … There were hundreds of processes of this kind in that epoch, which some dare to call the most beautiful of our history.”

Multiple death sentences are also reported by this same Protestant scholar, Galiffé, who delved into the records of that time. Describing a short period of Calvin’s rule he says, “One counts 30 executions of men and 28 of women, subdivided by method of death: 13 persons hanged, 10 beheaded, 55 quartered, 35 burned alive after being tortured.”

Reporting the religious persecutions of Calvin, author Jean Tet affirms that “from 1542 to 1546, which was the softer period of his government, we count 58 capital executions, 76 banishments and 900 imprisonments.”

In the blindness of his pride, the head of Swiss Protestantism issued the most extravagant moralizing prohibitions. He forbade sweets to be served at wedding banquets. He forbade all kinds of amusement – especially gambling, singing and dances – as inventions of the Devil. His despotism reached the point of forbidding people to drink from a mountain spring that was famous for healing the fever under the pretext that it was a form of idolatry. There were en masse denunciations of persons who were interrogated, placed under arrest and punished because they were healed in that manner….”

“…PERSECUTIONS AT CALVIN’S GENEVA The Minutes Book of the Geneva City Council, 1541-59 (translated by Stefan Zweig, Erasmus: The Right to Heresy):

This is the world envisioned by R. J. Rushdoony, Gary North, Doug Phillips, Bill Gothard, Ron Paul, Rand Paul, Ted Cruz, Keven Swanson, Mike Huckabee, Michele Bachmann, Phyllis Schlafly, Mark Driscoll, Debi & Michael Pearl, Russel Moore, C. J. Mahoney, Al Mohler, Gary DeMar, and so forth and so on.  It is a world that is being financed by the Brother’s Koch, and increasingly influential, politically.  It is the world of Rush Limbaugh, Sean Hannity, and FOX News.  Granted, few of the major players in the scene understand the monster they are helping to unleash.   What they don’t realize, that, when fully empowered, that monster is going to come back and eliminate them for not being holy enough.  I don’t know about you, but I don’t know many people who will be left alive after Gary North’s reign of terror.

One needs to understand that both Rushdoony and North consider democracy to be heresy.  Anyone who does not repent and bow to theocratic dictatorships will be executed as heretics – that’s you and me.

“...Rushdoony concludes: “God’s government prevails, and His alternatives are clear-cut: either men and nations obey His laws, or God invokes the death penalty against them.” Reconstructionists insist that “the death penalty is the maximum, not necessarily the mandatory penalty.” However, such judgments may depend less on Biblical Principles than on which faction gains power in the theocratic republic. The potential for bloodthirsty episodes on the order of the Salem witchcraft trials or the Spanish Inquisition is inadvertently revealed by Reconstructionist theologian Rev. Ray Sutton, who claims that the Reconstructed Biblical theocracies would be “happy” places, to which people would flock because “capital punishment is one of the best evangelistic tools of a society.”

The Biblically approved methods of execution include burning (at the stake for example), stoning, hanging, and “the sword.” Gary North, the self-described economist of Reconstructionism, prefers stoning because, among other things, stones are cheap, plentiful, and convenient. Punishments for non-capital crimes generally involve whipping, restitution in the form of indentured servitude, or slavery. Prisons would likely be only temporary holding tanks, prior to imposition of the actual sentence.

People who sympathize with Reconstructionism often flee the label because of the severe and unpopular nature of such views. Even those who feel it appropriate that they would be the governors of God’s theocracy often waffle on the particulars, like capital punishment for sinners and nonbelievers. Unflinching advocates, however, insist upon consistency. Rev. Greg Bahnsen, in his book By This Standard, writes: “We. . .endorse the justice of God’s penal code, if the Bible is to be the foundation of our Christian political ethic.”…”

I suspect most Episcopalians will end up on the chopping block as heretics.  I know I will. This is what we are empowering in this country.  The monster has been unleashed.  How do we stop it?  Does anyone really care?