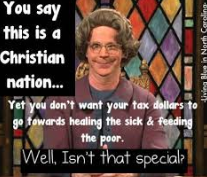 “The church today has fallen prey to the heresy of democracy.”  R.J. Rushdoony

This is the fourth in a series about the godly political take-over planned by godly men and the godly women who submit to them.

The Oak Initiative is made up of 300 godly Christian leaders who are going to turn this nation back to what it once was. Never mind the fact that people came here for freedom from religion. Their leaders include Rick Joyner and Jerry Boykin, that godly lover of a manly, sweaty Christ. Rick Joyner thinks that the only way our nation can be saved is by a military take-over.

“…Along with a political and spiritual shift we find our self in need of a shift in our core values and there are signs that this shift is happening. Unlike many other groups, our goal is to see the development of leaders and leadership skills in our members so that along with a shift in the spirit of America, we are ready to champion the core values that are based on biblical or kingdom principles and wisdom. Then it will be the blend of a spiritual awakening with sound wisdom that will lay a foundation for lasting results.

We not only want to identify leaders and develop leadership skills in our members but we want to encourage our members to find the wisdom of Daniel who as a captive servant in the realm of a foreign king was able to transform a nation through devotion to his King, strength of character and values, and with a controlled voice governed by respect, grace, and virtue. It was then that his wisdom caught the attention of all those around him as he was moved by the hand of God and prepared a seat for him as governor of the land from one kingdom into the next. Kingdoms literally passed over him as his seat of responsibility remained unchanged if not increased.

For us, it is not simply about measuring, evaluating, or responding to the change around us but rather being change-agents and facilitating change in every aspect of our culture as we, the Oak Initiative, become infused into the areas of social, cultural, and political impact wherever we find ourselves. As individuals, being responsive where we work and live, as a group, conveying a message of true hope and sound change based on wisdom, communicated with grace and patience – with a long term goal in mind – the preparation of the Church to be all she is meant to be in a world that is waiting for her unveiling.

For us, it is not just about less taxes, correction in government spending, large or small government, liberal or conservative agendas, or correcting the balance of power in our legislative branches at local, state, and federal levels. For us, it is about aiding and bringing a voice to a people who have lost their moral compass and not simply bringing about change from an external source of policy shifts and spending initiatives, but being a part of identifying and facilitating change from an internal perspective that lays a foundation for lasting reform and not simply reform until the next election.

For us, it is about awaking our people to the voice of our Founding Fathers recorded in the Declaration of Independence, the Constitution, and the Bill of Rights. It’s about bringing wisdom, which we have gained from our personal relationship with the Lord and study of His word, into the market place at every level of social, cultural, and political expression.

For us, it is not just a voting ballot or a single set of issues – it’s about being a part of an historical shift in a nation that is called to a destiny by God to disciple other nations. That calling will best be served by our individual and corporate repentance, soul searching and evaluation one on one with the Lord –and then, having done so, getting to our feet with clear heads, clean hands, pure hearts, and feet prepared, shining a light of value and virtue, speaking words of strength, and hope bringing about true and lasting change…”

It would be so easy, so simple to say that this was all about the white man’s hatred of Barack Obama, but, unfortunately, it isn’t. They’re using it as an excuse, to cause a heck of a lot of trouble and make things much worse, but it’s not about Barack Obama. They want their more racist followers to think it is. They’re using it, like they used the ACA to promote themselves, sell books, and to further Rushdoony’s Christian Reconstruction vision.

“…Simultaneously, (Samuel) Rodriguez was helping Rick Joyner to found the Oak Initiative, which produced virulent anti-healthcare reform media including claims that President Obama is leading the country into Marxism and that there is a secret provision in the healthcare bill for a force of like the Nazi brownshirts. Rodriguez was was also one of the religious leaders joining the Family Research Council in the anti-healthcare reform Prayercast on December 16, 2009 with Lou Engle, Rep. Michele Bachmann, Sen. Jim DeMint, Jim Garlow, and Harry Jackson….”

It’s all tied up with the Koch Brothers, Ayn Rand libertarianism, the militias, white supremacists, anti-immigration haters, Bill Gothard’s cult, former Vision Forum cultists, the John Birch Society, and hundreds of non profit organizations, all tied up in a lovely, red, white, and blue ribbon, promoted via Glenn Beck, Sean Hannity, Rush Limbaugh, Alex Jones, and Fox News. Good, honorable, and decent people who truly care about this country are then pushed to the position of outrage. They believe what they are being spoon fed on FOX, on the radio, via the mail, in the books they read, and in their churches, where it is even worse. The take-over is a perverted blend of libertarian billionaire self-interest and true believers who want to claim the country and the world for Christ. When people like Glenn Beck tell his brainwashed audience that the only textbook they need in schools is the Bible, there are members of his audience who believe him.