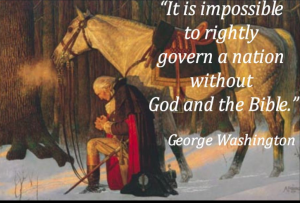 “...Theocracy is the worst of all governments. If we must have a tyrant a robber barron is far better than an inquisitor. The baron’s cruelty may sometimes sleep, his cupidity at some point may be sated; and since he dimly knows he is doing wrong he may possibly repent. But the inquisitor who mistakes his own cruelty and lust of power and fear for the voice of Heaven will torment us infinitely more because he torments us with the approval of his own conscience and his better impulses appear to him as temptations.

And since Theocracy is the worst, the nearer any government approaches to Theocracy the worse it will be. A metaphysic held by the rulers with the force of a religion, is a bad sign. It forbids them, like the inquisitor, to admit any grain of truth or good in their opponents, it abrogates the ordinary rules of morality, and it gives a seemingly high, super-personal sanction to all the very ordinary human passions by which, like other men, the rulers will frequently be actuated….” C.S. Lewis, Reflections on the Psalms, ch. 3

There is a headline from The Atlantic.  Obama Has a Religion Problem.  Sorry, but it’s not just Obama who has a religion problem in this country.  Now that the Supreme Court has set themselves up as Vatican West, various and sundry religious ‘leaders’ have sent a letter to the President, demanding that they be exempt from civil rights laws so they can continue to discriminate against gays and lesbians.  What is so disgusting is that the fake ‘liberal’ closet patriarch mega church Purpose Driven Rick Warren is one of them.  Now, let’s see if we get this straight.  These guys think that demanding they be exempt from giving equal rights to gays, and equity in hiring preferences violates their Constitutional rights to religious freedom.  Does this mean that the godly Kinists can now declare religious freedom and demand that they aren’t required to give equal rights and equal protection to “non-whites”?  That’s where this is going.

We’re now looking at majority rule when it comes to religious freedom.  Anywhere south of the Mason-Dixon and east of the Mighty Mississip, that allows for white supremacists to call the shots, right?  Christian Reconstructionism, created by R.J. Rushdoony is based on racism.  Let’s also be honest here.  We’re talking with people who just love Ron Paul.  Ron Paul is the creation of Rushdoony’s son-in-law Gary North.

“...There is no escape from this conclusion: the United States Constitution is an atheistic, humanistic covenant. The law governing the public oath of office reveals this. …”(Gary North, Political Polytheism, 403-404)

Sure, it’s about being able to now legally discriminate and be a proud, card carrying, godly racist, but there’s a heck of a lot more to it.  Let’s take Dearborn, Michigan where Muslims greatly out-number Christians.  What’s Hobby Lobby going to there?  Learn how to pass those burkas?  Or, do only evangelicals have rights?

“...To make possible this hypothetically disinterested examination of politics, the Constitution removed Christian religious tests as the judicial requirement of the judges and officers of the new national government. That, in and of itself, delivered the republic into the hands of the humanists. Nothing else was necessary after that. From that point on, the secularization of America was a mopping-up operation….” (Gary North, Political Polytheism, 367)

That’s the whole thing here.  Only Christians, according to Ron Paul’s political brain, Scary Gary North, have a right to have Constitutional rights.

“…What is needed is a very simple modification of the U.S. Constitution. First, the Preamble should begin:” We the people of the United States, as the lawful delegated agents of the Trinitarian God of the Bible, do ordain and establish. . . . “48 Second, Article VI, Clause 3, should state “The Senators and Representatives before mentioned, and the Members of the several State Legislatures, and all the executive and judicial Officers, both of the United States and of the several States, shall be bound by Oath or Affirmation, to support this Constitution; and a Trinitarian religious Test shall be required as a Qualification to any Office or public Trust under the United States.”...”   (Gary North, Political Polytheism, 653)

Thanks to the godly Conservatives on the Supreme Court, we now live in a nation where you can scream religious freedom, religious beliefs and get away with just about anything.  Wonder when some business owning billionaire is going to decide that he and his family worship the ancient god, Baal.  According to archaeology, infant sacrifice was required.  Now, I guess infanticide is legal, as long as the practitioner is rich enough to pay off everyone from Associated Justices of the Supreme Court, on down.

Now, there are some who think what happened is going to be a major set-back for the GOP.  I’m not so sure about that.  After a period of nearly 40 years, Rush Limbaugh, Fox News, Sean Hannity, Bill Gothard, Doug Phillips, Vision Forum, ATI, Rick Warren, and so forth and so on, and after over 70,000 municipalities, police, fire, sheriff departments, corporate brainwashing, brainwashing in the USAF, Character Counts basically has brainwashed most first responders. Gothard has/had a weekly email list of 90K ministers, to send forth his cult perversions.

Today is the 238th anniversary of our nation’s independence.  Never in my life-time have I felt that our very independence as a nation, what we hold near and dear, may have just been stolen from us.  It was stolen, not by those evil ‘commies’ or marxists but by the very individuals who claim they treasure our freedom.  The very Conservative Christians who spent the most time crying crocodile tears lamenting their religious persecution are the very ones who are doing the persecution.

Gary North, the brains behind Ron Paul and his army of bots, wants a theocratic government based on hard-core Calvinism.  Evidently the man is a total fool who thinks that he wants to repeat the evil mistakes of that great psychopath, John Calvin and establish a new Geneva here in the US. Like the others who are part of the Rushdoony created cult, people like Gothard and his minions who include the Duggars, Mike Huckabee, and so forth and so on.  Nothing less than a re-writing of our Constitution, to reflect the fact that they want everyone to follow John Calvin’s heretical teachings will do.

In many ways, our nation’s freedom has never been more in jeopardy.  That opening quote  “It is impossible to rightly govern a nation without God and the Bible.”, well, George Washington NEVER said it.  Never wrote it.  It’s another patriot lie.   I mention this because I’m a big George Washington fan.  He wasn’t very religious.  Neither was Franklin, who was most likely involved in the Hellfire Club in England.  John Adams was a Unitarian.  Jefferson was so disgusted with Christianity that he edited the Bible to suit himself.  Funny how godly patriots can’t get their facts right.

This is the second of at least four parts.  It continues tomorrow.