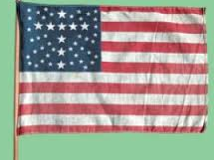 You must be the proper religion. It no longer is possible to be ‘just’ a Christian. One must be part of the right denomination. Oh, and they also need to be very good liars.

“...Now, we have the pastor of a large regional mega-church right there on national TV, asserting that those who disagree with his theology are defacto aliens in their own country. Yep. That’s right. If you’re not a born-again fundamentalist Christian, you can just turn in your passport and your sample ballot now. And don’t bother trying to collect on any of the public services your taxes pay for, either. You don’t have any more right to be here than someone who spent two days and nights crawling across the Rio Grande to pick strawberries. In fact, according to Rev. Fuiten: you have no rights worth respecting at all….”

According to experts, there are different types of conservative Christians. There are diversions within this group. The Al Mohlers of this world are more in the line of Christian Nationalism. Ted Cruz is a Theocrat. Ron Paul, the total and complete fake, is a pawn of Gary North. That alone makes him the most dangerous theocrat in the country, because of his following and his chop off the old block.

It gets even more confusing. Christian Reconstruction is made up of several groups who embrace increasingly extreme views.

Soft Dominionists are Christian Nationalists who believe that ‘sin’ as listed in the Bible create chaos and anarchy. They have been brainwashed to believe that feminists, secular humanists, homosexuals, lesbians, and even the use of contraception will lead to the downfall of this nation. They are your rank and file very conservative and very religious evangelical Baptists. Most have been slowly brainwashed into this position via FOX News, Rush Limbaugh, and the hard-line Calvinist take-over of many of the mainstream churches in this country. While they don’t want to establish a theocracy, and don’t want to do away with the Constitution and Bill of Rights, they are constantly in danger of being pushed farther and farther over the cliff by godly men with a political agenda. They are very well financed by the usual conservative and libertarian billionaire suspects who are using and manipulating them for their own political agenda. Think Jim DeMint and all he represents.

Hard Dominionists believe all of the above, and go even farther. They are the ones who want to do away with the Constitution and Bill of Rights. Like Judge Roy Moore, they feel that only Christians are deserving of Constitutional rights. They are extremely well financed, and supported by various militias. Some call for open civil war. They are hard-core libertarian. Women are not even second class citizens. There are some dominionists who call for a romanticized version of a Puritan agenda. Most advocate women being allowed to vote only if they are Christians and their husbands tell them how to vote. Most hard dominionists feel that women should not be allowed to vote.

Further, very few evangelicals even know what dominionism is and have no idea what Christian Reconstruction is. If they were made aware of the agenda, most would run away, in terror. Like that proverbial frog in the water, they have been gradually boiling to the point where they don’t even know what has happened to them. 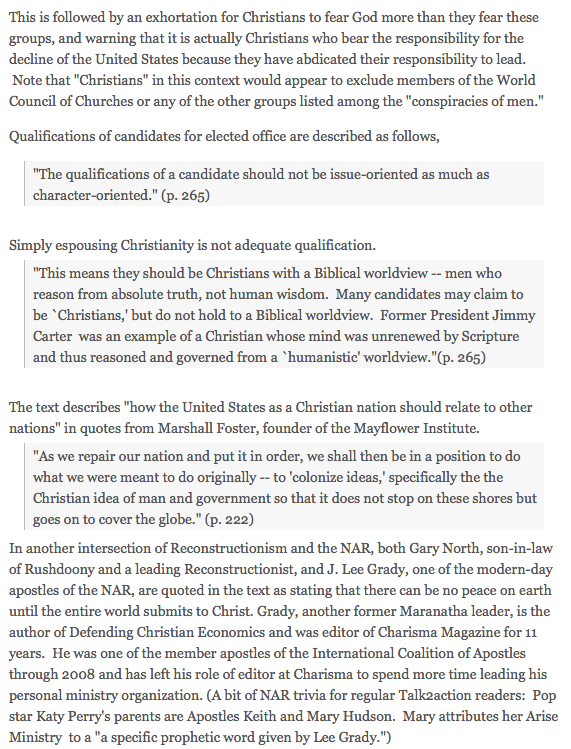 Chip Barlet has written an excellent guide to the far right, religious right, and various movements within it. In many ways, you need a scorecard to navigate through them. In many ways the intersect in some manner or another. Their organizations are almost incestuous. They are very well financed. According to Barlet:

Bartlet writes that there are different degrees of dominionist authoritarianism within each group. Christian Reconstruction is the ‘theopolitical’ cult behind Hard Dominionism.

If the hard core theocratic reconstructionists weren’t enough of a problem, these groups can also include:

Unfortunately, Gary North and his puppet, Ron Paul attract the very worst of these.