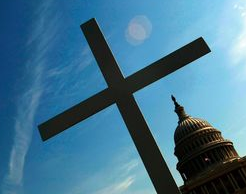 R. J. Rushdoony believed that democracy was heresy.  Anyone who refused to cease practicing it should be executed.  His son-in-law, Gary North believes the same thing. Gary North is the brains behind Ron Paul, who is the father of Rand Paul. Neither man has renounced Rushdoony’s belief that democracy is heresy and those involved in it should be punished by death.

There is a theocratic take-over of the United States.  No, it is not the work of fiction.  It is not the rantings of a really bad conspiracy.  It is very real, alive and well, and is going strong.  When you have at least four justices of the Supreme Court going along with the movement, when you control the United States House of Representatives, and the conservative air-ways, well, you are well on your way to winning.  And – they are winning.  The recent Hobby Lobby ruling proved how much they are winning.

“...The most militant of the Ayatollah-wanna-be’s are the members of the “Reconstructionist” movement. The Reconstructionists were founded by Rouas J. Rushdoony, a militant fundamentalist who was instrumental in getting Henry Morris’s book The Genesis Flood published in 1961. According to Rushdoony’s view, the United States should be directly transformed into a theocracy in which the fundamentalists would rule directly according to the will of God. “There can be no separation of Church and State,” Rushdoony declares. (cited in Marty and Appleby, Fundamentalisms Observed, 1991, p. 51 (1)) “Christians,” a Reconstructionist pamphlet declares, “are called upon by God to exercise dominion.” (cited in Marty and Appleby 1991, p. 50) The Reconstructionists propose doing away with the US Constitution and laws, and instead ruling directly according to the laws of God as set out in the Bible – they advocate a return to judicial punishment for religious crimes such as blasphemy or violating the Sabbath, as well as a return to such Biblically-approved punishments as stoning….”

The problem is the fact that we are dealing with good, honorable, and decent people who have been so battered and brainwashed, over a period of years, by the media, and in their churches, that they believe Christians are being persecuted in record numbers in this country.

“…This is easy to dismiss as just sheer stupidity of an ignorant few but the reconstructionist movement is a key player in the US culture wars. It has been long argued that the wars reflect the still simmering resentments of the South (and the Bible Belt) about not just the Civil War but the civil rights movement of the 1950s and 1960s. Lenny Flank has detailed how the resentments that arose from the later feed into the home school movement and the takeover of the Southern Baptist Convention by extremists in the 1970s 1980s and the subsequent fundamentalist agenda of the movement….”

They no longer even know what they believe, thanks to abject cultural ignorance of the Bible, and the don’t even know their theology.  When you are ignorant of what you believe, then deal with the alleged 2.5 million brainwashed followers of the ATI Bill Gothard cult, it doesn’t really matter.  Gothard is no different from Mark Driscoll, Rick Warren, Al Mohler, Doug Phillips, C.J. Mahoney, Keven Swanson, James Dobson, Jerry Boykin, and a myriad of godly religious leaders.  They pick and chose what they want from the Bible, twist it into something even the original authors would not recognize, and manipulate their followers.

It is a movement just as evil as was the founder, R. J. Rushdoony

“...What you will find in this section is just how violently inclined and dictatorial the extremes of the fundamentalist movement are. In detailing Rousas Rushdoony, we believe we are presenting a man every bit as potentially murderous as Stalin, Hitler, Pol Pot or anyone else you may want to name amongst the annals of evil.

The US fundamentalists often claim that the theory of evolution, or atheism, or whatever bee they have in their bonnet, resulted in Hitler and Stalin. Most of them are utterly clueless about European history and would do better to look at their own, more recent monsters, not least because their influence runs so deep in American society….”

The problem with is the fact that their followers are good, honest, decent men and women who vote.  They donate money to politicians.  They are political activists.  They are empowered citizens who have been brainwashed, with their puppet masters controlling the message. They have blessed us with the likes of Michele Bachmann, Rand Paul, Ted Cruz and so forth and so on. They control the House.  They control state houses all over the country.  With their handlers from ALEC who take marching orders from the Koch Brothers, we,  are looking a a total and complete disaster.  It is a disaster which has already begun.

Part two of the series will attempt to explain Rushdoony and his rules for living – or rather rules for dying.