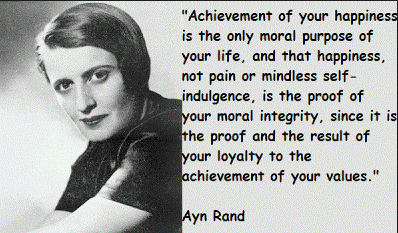 This is the third of five parts dealing with Christian Reconstruction and politics.  It is a political movement as much as a religious movement. It was created to be just that. The anti-woman stance of the far right, read that now the libertarian right, thanks to Koch Machine money, and Rushdoony’s love of libertarian politics, with both their adoration of Ludwig von Mises, is no mistake. It comes directly from von Mises, and his strong libertarian views. There is also a reason why the religious right, and the Rush Limbaugh right rail against feminism. According to von Mises, feminism is equal to socialism and Marxism.

“...Like all aspects of Reconstructionist theology, these two perspectives have real-world consequences. When translated into theology, North’s focus on the future role of the church led him to embrace a more active political agenda. Long before North and Rushdoony publicly parted ways, North had already aggressively sought out political influence. In 1976 he worked in Washington, D.C. as a staffer for Texas Representative Ron Paul. After Paul’s defeat, North wrote a testy screed warning Christians that Washington was a cesspool that can’t be changed overnight. He turned his back on national politics and began developing practical tactics for churches to deploy at the grassroots level.26 Unlike Rushdoony who focused most of his attention on ideas, North explicitly worked to pull together disparate church groups, most notably reaching out to charismatic and Pentecostal congregations in the South in an effort to fuse Reconstructionism’s grassroots activism with committed congregations. When American society collapses under the combined weight of massive foreign debt, military overstretch, and internal decadence, North hopes to have a network of churches ready to step into the breech. In preparation, he has written book after book aimed at educating Christians on how to live debt free, avoid electronic surveillance, and develop the skills necessary for surviving economic collapse. In short, North’s version of Reconstructionism blazed a path for the militia and Christian survivalist groups of the 1990s to follow….”

There are those who have wondered why people who claim to be Christians can have anything to do with the abject hatred Ayn Rand, the libertarian patron saint, had for God, Christ, and basically for anything decent.  The only possible explanation for this is the fact that the movement that supports them, and the billionaires who pay their way are Randian savants. There is no other logical explanation.  They are living in a libertarian world, in a libertarian paradise which has no basis in reality.

“…Free love is the socialists’ radical solution for sexual problems. The socialistic society abolishes the economic dependence of woman which results from the fact that woman is dependent on the income of her husband. Man and woman have the same economic rights and the same duties, as far as motherhood does not demand special consideration for the women. Public funds provide for the maintenance and education of the children, which are no longer the affairs of the parents but of society. Thus the relations between the sexes are no longer influenced by social and economic conditions….The family disappears and society is confronted with separate individuals only. Choice in love becomes completely free….”

“…So far as Feminism seeks to adjust the legal position of woman to that of man, so far as it seeks to offer her legal and economic freedom to develop and act in accordance with her inclinations, desires, and economic circumstances—so far it is nothing more than a branch of the great liberal movement, which advocates peaceful and free evolution. When, going beyond this, it attacks the institutions of social life under the impression that it will thus be able to remove the natural barriers, it is a spiritual child of Socialism. For it is a characteristic of Socialism to discover in social institutions the origin of unalterable facts of nature, and to endeavour, by reforming these institutions, to reform nature….”

The Christian Reconstructionist is a libertarian. They must be. Rushdoony was one. Gary North is one. His puppet creation, Ron Paul is one. The great irony, is that those of us who have constantly observed that Ayn Rand’s vision of an oligarchy where everything is given, basically, to the ultra wealthy who can afford to steal what they want, is a form of socialism. Going back to the origin of the term ‘libertarian’, it is just that, an anarchist socialism. In many ways, the theocratic style of government envisioned by today’s godly patriarch is little more than that.

“...If you’ve never heard of either “quiverfull” or the “dominion mandate,” allow me to briefly explain: quiverfull is the ideology that families should have as many children “as God gives them,” using no contraception of any kind. This is usually coupled with homeschooling the children (and often stopping formal education at age 18 or younger, particularly for females) and “training them up in the way they should go.” The longterm goal of quiverfull families is to essentially win the “culture wars” by having exponentially-increasing descendants who adhere to a specific set of beliefs. In essence, “take dominion” of the world for Christ and reconstruct it, with the goal to revive some form of Old Testament law, though the details are a bit murky and somewhat debated. My uncle, Geoff Botkin, went a step further and began selling the idea of a “200 year plan,” in concert with Doug Phillips, wherein every Christian patriarch should have a 200-year, multigenerational vision for his family, complete with a spreadsheet. So far, none of my uncle’s adult children have left home, and they contribute to his ministry, so it seems like it’s working pretty well for him….”

When you considers the requirements that are part of the entire movement, where women must be controlled, uneducated, modest, and submissive, the entire movement looks more and more like the American Christian version of the Taliban.  When fully engaged, we would have just about as much freedom as those poor souls forced to live under Taliban control. 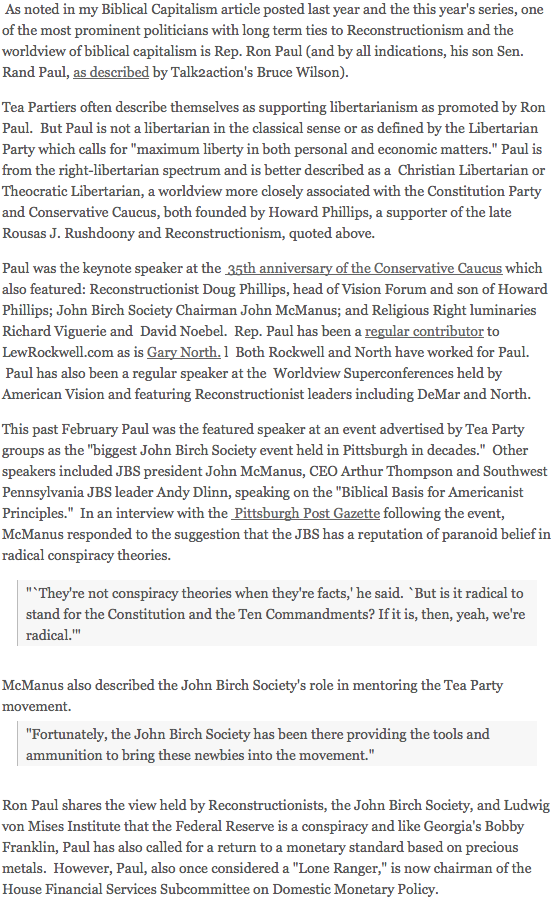 Ron Paul is libertarian.  The great irony here is that under Reconstruction, every aspect of American life will be controlled by the theocratic government.  Someone’s not behind honest here.  Evidently Ron Paul, as usual, has been lying about his true intentions, and those of his followers.  It makes you wonder about his son, doesn’t it?

“…Ron Paul has long been a favorite politician of Christian Reconstructionists. North was a Paul staffer during the Texas congressman’s first term and has called him the “mahatma of self-government.” As Adele Stan reported on Alternet, in 2008, Howard Phillips, a Christian Reconstructionist who founded the Constitution Party, was the keynote speaker at the rally Paul convened in the shadow of the Republican convention. (That year, Paul endorsed the Constitution Party candidate for president over John McCain.) “The people who I know who are big Ron Paul guys are old school Reconstructionists,” says Paul supporter Brian D. Nolder, the pastor of Christ the Redeemer Church in Pella, Iowa….”

One wonders what goes through the minds of men and women who are assimilated into such a movement.  What causes them to leave judgment and reason behind, and blindly follow their godly leader?