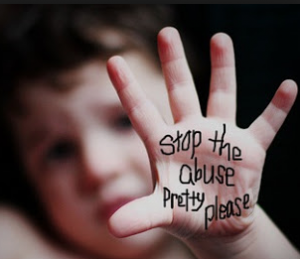 If you are a godly minister in a godly Calvinistic evangelical denomination, and have been involved in non-godly pedophile activity, then, like Larry Tomczak, who co-founded Sovereign Grace Ministries, well, say a prayer of thanks for the statute of limitations!  Also be thankful for godly parents who are so into the worship of godly ministers that they believe all the ungodly sh*t told to them, and don’t have the backbone to go against the congregation and report godly pedophiles. Instead, parents are harassed and brainwashed into ‘forgiving’ the pedophile who has managed to ruin their child’s life.   Not only that, but all those godly ministers stand by one another, covering up the abuse.  After all, they have a money machine to keep primed.

Make no mistake, this is NOT about Christ.  This is about wealth, power, prestige, book sales, mega congregations, controlling and ruining lives, and being important.  It is about speaker’s fees, free travel, first class tickets, suites, and adoring godly fans who have made graven images out of these godly men.  (Godly women are not included).  It is about controlling lives to the point of abuse.   You see, godly Christians, do not report pedophiles to the cops.  They forgive and let their godly ministers handle it.  If they do report these godly pedophiles to the cops, their lives become an ungodly living hell. (Noel’s Story)  Their godly minister told this family they had a carnal desire to see the godly pedophile suffer.

Or…protecting a leader in a church, blaming his wife for pressing charges against him for molesting his children.

“…Despite all of their pleadings my mother insisted on justice and pressed charges. They had claimed they were looking for counseling for my mother and her child, when really they were biding time, retaining legal counsel for this man, to allow him to turn himself in as a show of repentance. They pressured her to ask the court for leniency for this man who had abused her child. They testified as character witnesses for him in court. He had repented and been forgiven, just like that. We were all warned not to tell anyone in the church, even though the abuser was still attending — it would be gossip.

But my mother was not submissive enough and since she refused to ask the court to not send this tithing man to jail, we were all put out of the church, out of the school, and the pastors told my mother, our “poverty was self induced” because she had not been submissive to their guidance. My mother pleaded with the church for help, but they only further demonized her.

Having been a homemaker and mother for years in the church approved way, she had little means of providing for her 9 children. She went and got a minimum wage job and worked until it almost killed her. Our electricity was cut off, our house was in foreclosure, we were pretty much starving, and she came down with pneumonia and was hospitalized. Having offered no help so far, the same pastors showed up to let her know they would make sure all of us children were taken care of while she was in the hospital.

We ended up all split apart, turned over to the state child welfare division, and spent the next several years separated in foster homes, institutions and shelters. But the pastors care and concern only ever was for the molester — they arranged for the kids to “visit their father”, and arranged for my sister, the victim, to have to sit down in a meeting to accept his apology, so he could be forgiven and resume membership in the church….”

The idea is to protect the ministry and the church.  Evidently pedophiles are moved from one church to another, with the families of the innocently abused bullied into forgiving submission.

“...By following the money trail, we believe we have discovered the pot of gold at the end of the rainbow. When a rather obscure charismatic (C.J. Mahaney) receives a glowing endorsement from a well-respected Baptist leader (Al Mohler), the results can be extremely profitable for both Mahaney and Southern Seminary!

Why would reformed leaders like Al Mohler, President of SBTS, endorse C.J. Mahaney who is not a Southern Baptist and who arguably is not a theologian? We believe one of the secrets is that Mahaney’s ministry has led the way in AUTHORITARIANISM for at least THREE DECADES. Could it be that reformed leaders are willing to endorse C.J. Mahaney and Sovereign Grace Ministries in exchange for learning how to rule their flocks by implementing SGM’s church polity?

Here’s where the lack of balance in Sovereign Grace Ministries comes into play. We have done extensive research on SGM by following two blogs that are speaking out against this “family of churches”. They are www.sgmsurvivors.com and www.sgmrefuge.com

We have read alarming testimonies written by current and former SGM members, and we have concluded that the pastors in this “family of churches” rule with an iron fist. Patriarchy is preached and practiced in these churches, and the members are extremely fearful. We have never seen such heavy-handed control exercised in a church setting. As we have been following the New Calvinists, it appears they want to implement SGM “management” techniques in their own congregations. We dare you to read a few entries on either of these anti-SGM blogs. You will be SHOCKED just as we were. We are praying fervently that the truth about SGM will be revealed to the entire world because our brothers and sisters in Christ are being victimized in this spiritually abusive system….”

In the state of New Mexico, no matter who you are, what your status is, or how important you are, or your position, if you know of a child being abused or molested, and you do not reported the situation to CPS or law enforcement, allegedly it is a crime.  Because this is a post about Sovereign Grace Ministries,  C. J. Mahoney, Albert Molher, and so forth and so on, we won’t be getting into the scandal that is New Mexico’s Child Protection Services under Susana Martinez.  If the incidents that occurred within other states had occurred here,  every single one of these godly men would be facing prison time for the cover-up and failure to report the crime.

Jenefer Igarashi discovered that her six year old son had been molested.  When she and her husband reported the incident, they were literally  declared the ‘sinners’. 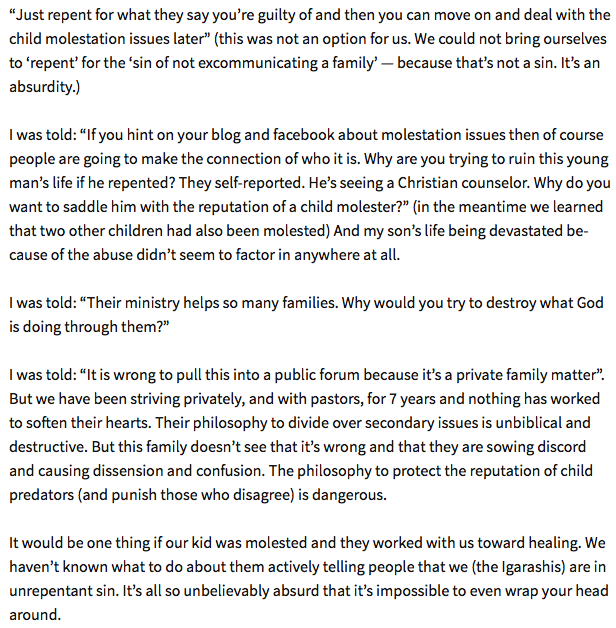 What happens when so-called ‘godly’ men and women don’t get it when it comes to pedophiles?  This is an alleged tale about two leaders in the home school movement.  It had been revealed that one of the members of a home church they attended was a convicted pedophile.  This is so disturbing on so many levels, including the fact that the man was allowed to be around children, simply because he claimed that he was now a Christian and no longer had those urges.  Then this….

“…One of the girls in the fellowship either came into the house or called her mother outside to tell her that “Mr. Ballard picked me up and slid my body against his and it made me feel weird.” or some statement to that effect. It was obvious that young Miss H. was extremely uncomfortable and didn’t like it. I don’t remember how old she was, maybe 10 or 11? Mr. Ballard was taken aside by the men and asked for his side of what Miss H said happened. He admitted to hugging the girl but that there were no improprieties. The men of the group then asked him to leave and told him he would, until further notice, stay away from the group. The men and the parents of the girl would find out exactly what had happened. At this point in time, my timetable is fuzzy. I don’t remember exactly how much time passed before Paul Saurez took it upon himself to come to Roy’s defense. There was a lengthy meeting in our garage between Paul and the men listed above, with Paul stating that it was wrong, unbiblical, and unloving in the approach the men were taking with Roy. Paul said he respected the men and their wisdom but quickly changed his tune when the men stuck to their guns and said Roy would NOT be allowed to join the group again until further notice. Meanwhile, Gena called me into my daughters’ bedroom to tell me that the girl’s mother is “out of control” and “blowing this way out of proportion”. Gena made statements to the effect that “she (young Miss H) dresses too old for her age and acts very sexy for her age”, of course insinuating that it was the girl’s fault. Gena intentionally tried to intimidate Mrs H and turn the whole group against her by continuing to state that Mrs. H was overreacting, blowing things out of proportion and making the fellowship turn against Mr. Ballard. Gena even wondered, out loud to me, why Mrs. H would believe the words of a 10 year old over those of a grown man. Gena stated that kids “make stuff up all the time”. By the end of this day, Mrs. H was in tears, almost hysterically, because of the incident with her daughter, at the hands of Mr. Ballard, and the subsequent treatment of her, at the hands of Gena….”

Unfortunately, if you delve into some of these ministries, you discover they are almost a cover-up for pedophiles.  Sure, it’s not on purpose, but, because of the desire for money and power, they have a tendency to demand the abused do the forgiving.  It’s the Bill Gothard and ATI way.  They say that C. J. Mahaney is finally being held accountable for some of his sins of cover-up, but how long will this last?  It has been observed:

“…Throughout the Sovereign Grace lawsuit and sex abuse cases there has been one underlying theme that seems to be prevalent. It is the idea that as long as someone has the right doctrine, nothing else matters. It seems that The Gospel Coalition has long sided with Mahaney because he has the “correct” views on complementarianism, he has the right views on Reformed doctrine, he has the right views on the Cross, and sin, and the Gospel. Since Mahaney had all of those really important doctrinal matters correct, it seems they were willing and have been willing to overlook the fact that C.J. Mahaney likely knew about sex abuse cases that occurred in his church and that he and his pastors failed to address those problems appropriately….”

Because of the recent trial and conviction of convicted pedophile (no longer alleged) Nathaniel Morales, Mahaney and his associates have been pushed into a corner.  They’ve been caught, on the record, on court record, of having participated in a cover-up of child sexual abuse, and of lying about it.  Not only is it the cover-up that gets you, but the defense of the godly men covering up their godly pedophilia problems.

It’s not really about protecting the pedophile, but the reputation of the machine, the leader, and the flow of money. Godly?  Christ-like?  Somehow, I don’t think so.