PART II: Is the United States Slouching Toward Sodom? 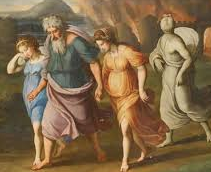 Yesterday, we learned that the real reason Sodom was destroyed was not because of homosexual activity, but because the inhabitants refused to care for others.  They had an abundance of food, and fruit, of meat, and grain, but they allowed those in need to starve.  When its citizens tried to help those in need, they were severely punished, even executed.  Evidently, according to Torah tradition, the reason the city was destroyed was because Lot’s daughter was convicted of helping the poor.  She was due to be executed.  God heard her cry.

The inhabitants of Sodom were callous, cruel, and constantly grasping for more.  They would kill over riches.  They would execute anyone who tried to help others.  Like so many in today’s far right Christians, they detested weakness.  If a person was in need, it was their fault.  They were not to be helped, rather they were to be allowed to starve to death as a lesson to others.

“…Fischer, as director of Issues Analysis for the extremist Christian American Family Association (AFA), said on two weeks ago that people who used welfare and other government services needed to “kiss the ground beneath the richest 1 percent of Americans.” Fischer also said Americans who paid into Social Security retirement and Medicare throughout their working lives had no right to collect, or expect to collect, on their benefits when they retire. According to the “follower of Christ,” Americans are laboring under a “myth” that they had a right to collect on their so-called “entitlements” or “earned government benefits” he claimed were socialism….”…..However, Fischer’s blasphemy against Jesus Christ and apostasy against his teachings did not stop with demanding that the 99% fall down and prostate themselves before the rich. He also railed against the government and “the involuntary transfer of wealth through taxation” he asserted “makes us a socialist country. This is Marxism on display.” In 2012, another Christian extremist, mega-church preacher Rick Warren, said via Twitter that “HALF of America pays NO taxes. Zero, so they’re happy for tax rates to be raised on the other half that DOES pay taxes.” Jesus likely wept…”

In other words, what brought about the destruction of Sodom was the fact that they were one of the wealthiest nations at that time.  They did nothing to help others, discouraging it.  Unfortunately, the same thing is happening here in this country.  In city after city, laws are being passed to make it illegal for the homeless to even reside within city limits.

“…Introduced last month, the “Responsible Compassion” campaign has three parts: First, housing and services for people who live on the streets; second, increased “surveillance and inspections of areas typically occupied by homeless/transients” and new ordinances to outlaw panhandling; and finally, a “public awareness” campaign to tell people who have the audacity to give alms to the poor that their behavior is only perpetuating poverty.

Unlike steps two and three, which serve to criminalize homelessness and chastise do-gooders, providing housing and comprehensive services would theoretically help homeless individuals. The problem is that Edwards doesn’t want to spend a single taxpayer dollar in the process. She told ThinkProgress that the city would instead rely on volunteers and charitable organizations, all of whom are funded through private donations, to fill the void. “Why would we expend funds when these services are available via volunteers?” she argued. In other words, the city isn’t just looking to privatize the responsibility of homeless services, but completely offload the financial burden as well.

Rick Cohen at Nonprofit Quarterly criticizes this approach: “A very affluent community, Temecula could probably do a lot more to help the city’s tiny homeless population out of its own taxpayer revenues.” Indeed, the median household income in Temecula is nearly 30 percent higher than California generally (just under $80,000 versus just over $60,000) and has a poverty rate more than 40 percent lower than the state’s (8.9 percent versus 15.3 percent). It’s also not as though there are huge swaths of homeless people in Temecula and the city simply can’t afford to help. The most recent count identified 80 homeless individuals in Temecula, 50 of whom had no shelter. In other words, Cohen writes, the city “could probably generate services and supports for the homeless that look more like service and less like policing.”…”

There is a death of compassion in this country.  It is due to the far right and the libertarian right, and those wonderful compassionate so-called godly ‘christians’ who also hate homosexuals.

And so forth and so on.

Yes, this country could be going the way of Sodom and Gomorrah, but not because of homosexuality, but because the very men and women who are entrusted to carry out acts of Christian Charity.

Matthew 25:35-40For I was hungry and you gave me food, I was thirsty and you gave me something to drink, I was a stranger and you welcomed me, I was naked and you gave me clothing, I was sick and you took care of me, I was in prison and you visited me.” Then the righteous will answer him, “Lord, when was it that we saw you hungry and gave you food, or thirsty and gave you something to drink? And when was it that we saw you a stranger and welcomed you, or naked and gave you clothing? And when was it that we saw you sick or in prison and visited you?” And the king will answer them, “Truly I tell you, just as you did it to one of the least of these who are members of my family, you did it to me.”

Evidently Christ thought helping others was important.  Evidently the Lord thought it important enough to take out a very rich and wealthy city.  Evidently we’re now living in the post-Christian era.  It makes sense.  Christian Reconstructionism, which is influencing this hatred, along with Ayn Rand’s version of libertarian hates weakness.  Those who cannot help themselves are to be trod upon, to be destroyed, neither seen nor heard as they die, wallowing in a ditch somewhere.

God help us all!