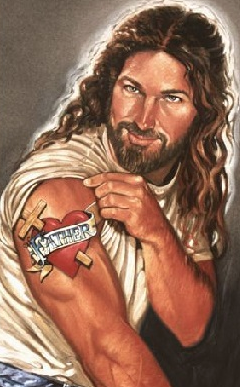 Nothing annoys me more than historical ignorance being spouted as fact, lapped up by an equally ignorant audience.  One of the reasons I never enjoyed going to the little country church way up in the North Carolina mountains where my family summered was because, by the time I was in junior high, I was such a total stickler about history, that I had no tolerance for the historical ignorance spewed by poorly educated country preachers.  Yes, that makes me a snob.  No, not a religious snob, but a history snob. It gets very old, very fast, trust me.

Both the far left and the far right have a very skewed version of the Christian religion.  Both have a downright weird version of Christ.  I don’t know which is the world.  In a way, as long as they get the history and sociology right, then I don’t have as much to complain about.

Jerry Boykin has this very strange version of Christ, a man’s man, muscular, dirty, long-haired, smelly, and oh so very manly.  His description of Jesus of Nazareth, the other day, borders on the homo-erotic.  One thing he does prove is that he don’t know much about history!

This though is wild and crazy enough to discuss.  The extreme right now has a new version of Christ.  Not only have they basically erased the Sermon on the Mount, but they have tried to create something that works well with Ayn Rand and libertarianism.  You know – up from the boot-straps, militant, sociopath, tax dodging, he man who probably hated women.  They don’t need compassion, love, kindness, and feminism.  Not their Christianity 2.1.  Nope, Jesus of Nazareth was a he man, a man’s man.

So many idiots and so little time!

The best way to get started is with the historical basics.  Jesus of Nazareth lived during the Roman occupation of Judea. I’m perfectly content to use the dates that go anywhere from 7-2BC to 30-33AD.  There are historic markers along the way to indicate the approximate time he lived.  Pontius Pilate became the prefect (governor) of Judea in 26AD.  He remained there until right before the death of Tiberius that occurred on March 17, 37AD.  His prefecture probably ended in 36AD . He lived in Caesarea, and worked in Jerusalem.  Typical of Roman bureaucrats, Pontius Pilate rose up through the ranks.  He had some duties with the military, was in charge of taxes, and had limited judicial functions.  The reason a person wanted to be a prefect in a fairly wealthy area such as Judea was in the taxes.  Rome received its cut.  The prefect kept the rest. That’s how a Roman became wealthy and retired in style.  The prefecture of Judea was under the authority of the legate of Syria.  Pilot had about 3000 soldiers at his disposal.

*NOTE:  I have a tendency to put the Exodus from Egypt as either directly before Akhenaten or directly after.

We know how the world has changed in the 2000 years since Christ rose again, and the Christian religion began. Our world has completely changed.  We don’t dress the same way, act the same, speak the same language, have the same diet, and the same technology.  It is abjectly foolish to portray Jesus of Nazareth as living the same way that Abraham did.  He existed in the Bronze Age.  Christ lived in Classical Antiquity.

Another way to put things into perspective is that Jesus of Nazareth was as far removed from Moses as are Geoffrey Chaucer, Dante Alighieri, Scottish Wars of Independence, Edward III, Hundred Year’s War, or the beginning of the Renaissance, David II of Scotland, or Richard II of England  from Jesus of Nazareth.  The world had changed from the time of Christ, to the beginning of the Renaissance.

In order to understand the life of Christ, it is imperative to understand that the land of Roman Judea was so far removed from the Promised Land of Moses that it would have been unrecognizable to the first inhabitants of the Promised Land.  The Roman Holy Lands are more recognizable to us that the ancient world of Moses would have been to anyone who lived during the time of Christ.

While the basic religion was the same, the culture of the Judeans would also be unrecognizable to Abraham or Moses, or even David.  The dress was different, sociology was different, diet was different, and social customs were different.  Abraham was barely out of the Neolithic era, a desert wanderer, and a nomad.  His great-grandsons, the children of Jacob were almost savage, herders, barbarians, unwashed and filthy.  When they went to retrieve grain from Egypt and encountered their long lost brother, Joseph, now the PM of Egypt, if not already Pharaoh, they didn’t need to announce their arrival. He would have been able to smell them a mile away.

One of the reasons for the rules and regulations given to the Children of Israel during the epic journey through the desert was to pound some sense into them, ‘civilize’ them, and teach them entirely new customs.  When the far right pictures the world at the time of Christ, their version is completely stunted.  They are reading and dealing with the Old Testament, in a world that literally came to an end a good five hundred years before Jesus of Nazareth was even born.

The world he was born into was completely different from the Old Testament world, totally and completely.

Part II will continue on Saturday.