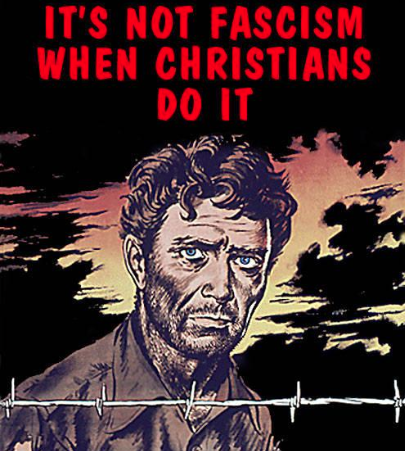 “…As a tactic for a short-run defense of the independent Christian school movement, the appeal to religious liberty is legitimate. Everyone who is attempting to impose a world-and-life view on a majority (or on a ruling minority) always uses some version of the liberty doctrine to buy himself and his movement some time, some organizational freedom, and some power. . . . So let us be blunt about it: we must use the doctrine of religious liberty to gain independence for Christian schools until we train up a generation of people who know that there is no religious neutrality, no neutral law, no neutral education, and no neutral civil government. Then they will get busy in constructing a Bible-based social, political, and religious order which finally denies the religious liberty of the enemies of God…” Gary North

This is the first of four parts about Christian Reconstructionism and how it is corrupting the faith of this nation.  It is an unhealthy blend of politics and religion, where only freedom is to be limited to Christians who believe the ‘right way’.  Women are to be repressed.  Children homeschooled and almost viciously abused, as babies, to behave in a godly manner.  The only individuals who will be allowed to have freedom are those who own property and belong to the right church.

“...When asked directly whether religious freedom and liberty applied to people of other religions, some were very clear that this is a freedom only for Christians. Throughout CR discourse (in talks, materials, and in conversation), it is noted that the original intent for the idea of religious freedom was to protect Christians from being restricted in how they could worship; the origin of this idea, in other words, was to prevent one Christian denomination from having dominance over others – but all the denominations were always presupposed to be Christian. Some stated that it is fine for other religions to practice their beliefs, but that they should not impose their practices upon others. Harriet and Mildred spoke of Muslims coming to America, and said that these people should not impose their religion upon America, because America is not an Islamic nation (H. Robinson & M. Briar, personal communication, May 31, 2007). When asked if non-Christian people could be (elected) leaders in America, Roy, referring to Muslims, said that it might not be possible for “them” to lead because “these people do not understand the foundations of our nation…its freedom comes from a Christian ethic.” (R. Booker, personal communication, June 18, 2008). Others seemed to echo this sentiment, that legislators probably could not be non-Christians because their ethics and choices would not be based on (Christian) truth and the guidance of the sovereign God. Harriet and Mildred presented the idea that complications arising from the presence of other religions in America have appeared only fairly recently. They explained that the idea of religious diversity was working for a while, but more and more Islamic people came into the nation. They began to receive freedoms and Christians ended up being persecuted and discriminated against because of society’s move toward openness and tolerance. The openness backfired, they explained, and worked against Christians…”

The whole idea is to control the family.

In an age of deteriorating families, deadbeat dads, and disregard for traditional family boundaries and values, Christians have responded by “focusing on the family.” Many aberrant groups and cults, on the other hand, compel followers to forsake family, interrupting this natural and significant expression of God’s protection and love. There are also those who encourage forsaking nearly everything but family. In light of our sinful “secularized” times, can the value of family be overrated?

Some Christians see family as the focal point of Christianity, relying on the teachings of leaders such as R. J. Rushdoony. Considered the father of Christian Reconstructionism, Rushdoony has stated, “All the basic governmental powers in society, save one, the death penalty, have been given [by God] to the family, not to the state nor to the church.…A mark of anti-Christianity is the move to strip the family of these powers.”  In response to this idea, voices such as Patriarch magazine promote “home education, home business, home church, home birth, family ministry, family health, family worship…courtship and betrothal, family-based welfare.”  This view of the family may also include rejection of organized sports, church youth and singles’ groups, and neighborhood playmates.

Proponents portray this view as “balanced” and acknowledge that the home is under the authority of the church. In this paradigm, however, the church is a “home church” made up of like-minded families who isolate themselves from non-family-focused activities and from other Christians who do not share their particular view of family life and child-rearing values.

From within this structure, church leaders who let their wives work outside the home, use credit, limit family size, send their children to public schools, and so on, are viewed in a negative light. Concerning such leaders, Patriarch asks, “Can I remain under the authority of someone who so denies the Bible by his life? Can my family continue to maintain fellowship in a church whose leaders so disregard the clear teachings of God’s Word?” Patriarch further suggests that youth groups and Sunday school programs demonstrate a “failure of the church to teach the principles of parental responsibility for child training and to reinforce it in the church’s programs,” and that the use of these programs in a church “may well be a reason to leave….”

Could Mary Pride be one of the most dangerous women in this country?  Is it possible she is one of the  most corrupting influence on homeschooling, submission, and patriarchy?  Why is her connection to Ron Paul so important?  Is she the missing link, the one single individual, the smoking gun, the Typhoid Mary of patriarchal dominionism?   When you add her strangeness to that of Glenn Beck, who thinks that we get our laws from those of Moses, we are in trouble.

“...I first met DeMar 18 months ago at his church, Midway Presbyterian, in the Atlanta suburb of Powder Springs, where he was teaching a class on government. During the session, a teenage homeschooler talked about how he had tried in a paper to prove that the family is a form of “Christian government.” “You don’t have to prove that,” DeMar gently chided, and then added, with more heat: “That’s established—established by God!” DeMar’s lecture focused on the “three governments”—family, church, and state—all of which, he told me, should be ruled by God-fearing men.

The Old Testament—with its 600 or so Mosaic laws—is the inflexible guide for the society DeMar and other Reconstructionists envision. Government posts would be reserved for the righteous, as long as they are male. There would be thousands of executions a year, with stoning a preferred method because it would turn the deaths into “community projects,” as movement theologian North has noted. Sinners in line for the death penalty would include women who commit adultery or lie about their virginity, blasphemers, witches, children who strike their parents, and gay men (lesbians, however, would be spared because no specific reference to them can be found in the Books of Moses). DeMar told me that among Reconstructionists he is considered something of a liberal, because he’d execute gays only if they were caught indulging in sodomy. “I’m happy to just drive them back into the closet,” he said….”

Have you scratched you head and openly stated that the churches as you know them have changed into something you don’t recognize? They are acting like something entirely different.  Several friends and I have been discussing this for months.  Like someone told me last week, we’ve reached the point where people don’t know what their church or denomination believe.  They take everything at face value, and political value.  Faith is not about politics, or it shouldn’t be.  It should be about faith.

This is the first of four parts dealing with the corruption Christian Reconstructionism had caused in Christianity.  Part II will continue on Tuesday.