Thanks to the influence of good friend and confident, Sally Vee, The Pink Flamingo has become a huge fan of …Read the Rest

Is it possible the now infamously legendary “chupacabra” is a newly emerged breed of dog?  You do realize dogs are …Read the Rest

Have you hear the one about the 20 foot Great White that bit another Great White in half? 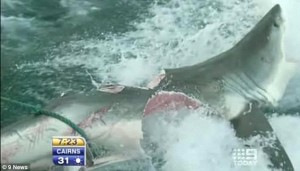 Naturally this is just another excuse for a little John Williams music.

Seriously, folks – a 20 foot Great White is roaming the shores of Queensland, Australia.

Ever Heard of the Belt Road Booger?

August 9, 1979 the Belt Road Booger was seen for the 1st time.  It would later be known as the …Read the Rest

I’ve finally found a good New Mexico story.  You realize some things happen only in New Mexico.  That could be …Read the Rest

The Lake Worth Muck Monster

Monster Quest did an hour on the critter.  Everyone in West Palm is now talking about it  –  the great …Read the Rest

BUMPED UP AND UPDATED: The story has finally made the national news.  Local “experts” say it nothing more than a …Read the Rest

Has Nessie finally been caught on sonar?  This time a large group of people, the cast of a film, were …Read the Rest

Has another version of the Montok Monster been found, dead?  I’m not publishing the photo because it looks fairly vile.  …Read the Rest

Chuck Bolden to be named NASA Administrator? He says no. Did you know Republicans are happier than Democrats?  It sure …Read the Rest

TUESDAY, DECEMBER 2 Robert came this evening to help with the Great Cat Round-Up.  This morning was the “last straw” …Read the Rest