The Silly Season Is In Full Swing: Adelson vs. Koch

Well, boys and girls, the Silly Season is well upon us. Get out your score card, a dry erase marker, …Read the Rest

We Are All Bigots, Unfortunately

Today is Cinco de Mayo.  Kick back, don’t drink and drive, have a great Margarita. (The best I’ve ever tasted …Read the Rest

We Need to Allow Racists to Be Racists, Not Hide Their Agenda

This week, everyone was shocked, shocked I tell you, to discover that there were/are overt racists hiding within the GOP.  …Read the Rest

What Far Right Bigots Get Wrong About Wealth

Peter Schiff, CEO, ultra wealthy billionaire thinks that the ‘mentally retarded’ should be paid only about two bucks an hour.  …Read the Rest

The Daily Beast had an interesting headline:  The Peddlers of Resentment.  On the surface, it is entirely accurate, below the …Read the Rest

On Friday, at the increasingly insane gathering known as CPAC (it was once an honorable institution) the far right managed …Read the Rest

Between Obama and a Hard Place

Deciding to vote for Barack Obama was not an easy thing, not for this life-long Republican.  But, it had to …Read the Rest

For years, The Pink Flamingo has been defending liberal Memphis Congressman Steve Cohen from the vicious attacks against him, from …Read the Rest

Will Romney’s October Surprise Backfire on the GOP?

Everyone is talking about an October Surprise.  From what The Pink Flamingo has been able to uncover, it appears that …Read the Rest

The original title for this post was FAIR, Vdare, Racism, Hate & Little White Male Bigots, then The Pink Flamingo …Read the Rest

Back in the USSR?

When a FOX News person talks about what Reagan did after he won the Cold War and the USSR, fell, …Read the Rest

It looks like something over 1000 conservative “Christian” ministers are going to tell their congregations how to vote, and openly …Read the Rest

Being a member of an organization that is labeled a hate group does not make one a domestic terrorist.  Nor …Read the Rest

Why Are Conservatives Incapable of Facing Reality?

“…“Leaving aside the intended malice, I actually think ‘White Supremacist’ is not bad semantically,” he wrote. “White supremacy, in the …Read the Rest

Welcome to the Dead Elephant Society

It’s all over folks. Friends, Republicans and countrymen, lend me your ears; I come to bury the GOP, not to …Read the Rest

I detest hypocrites.  For the next few days, at CPAC, you are going to hear one and all denounce abortion, …Read the Rest

Could Someone Rid Us of the Annoying Paul Family?

Why would anyone even think about voting for Ron Paul? Does anyone even doubt that Ron Paul is going to …Read the Rest

The Pink Flamingo has been very outspoken detailing links between the CofCC, Stormfront, and the tea parties, especially in South …Read the Rest

Politics are full of deliciously sick and perverse irony.  This is one the worst. With very few exceptions, conservatives and …Read the Rest

Exposing the Roaches (once again)

Randall Terry is a good Christian.  Like the Grand Inquisitors of old, he wishes to destroy anyone who runs afoul …Read the Rest 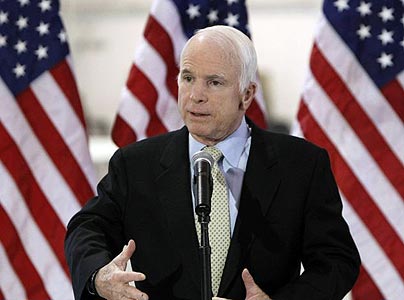 For years The Pink Flamingo has been telling you how vile Peter Brimelow and his Vdare associates are.

I am an unabashed fan of John McCain. I think he is one of our greatest living Americans. For horrid, white supremacists like Peter Brimelow and his slime to denigrate a great man like McCain is deplorable. Then again, they are the slime below the pond scum.

“…Allegations are not new that he campaigned against investigations and disclosures that the U.S. abandoned missing prisoners at the end of the Vietnam War, but the reports had no traction and were largely ignored.That they have arisen again, seems largely because McCain is in a serious fight to retain the Arizona Senate Seat that he’s held since 1986. The threat is not from a Democratic contender, but from the right — ultra-conservative J.D. Hayworth whom admirers describe as a “patriotic immigration reformer,” and critics call “one of the ten dumbest members of Congress.”

Today is Wyatt Earp’s birthday.  It is rather appropriate to focus in on his Vendetta Ride, Immigration Reform, and the …Read the Rest

The Infamous “Why I Hate Conservatives”

The War for the Conservative Soul Has Begun

“You’ve called down the thunder, and now you’ve got it.” Kurt Russell as Wyatt Earp in Tombstone

Pink Flamingo readers know I’ve taken the side of Charles Johnson at LGF when it comes to Robert Stacy McCain and his little friends. I think Johnson is over the top on a few things, but he is 100% right on when it comes to exposing the vile, corrupt, racist, filth that is festering within certain ranks of the conservative far right.

Now AJ Strata, one of the great voices of reason has joined the war, for indeed it is a war.

“…But when I look at what The Other McCain has written over time, I find myself repulsed well beyond my moral limits of tolerance. Anyone who thinks “race” verses “human beings” is off track. Way off track. And anyone who defends slavery is plain insane. LGF noted a detailed analysis of McCain blathering which has pushed me to the point I must make a public stand. Some disturbing excerpts of the thinking of a sick mind:…”

It is a war for the conservative soul and a war to preserve the GOP and wrestle it back from the minions of the likes of Robert Stacy McCain, Pat Buchanan, Peter Brimelow, Michelle Malkin, Bay Buchanan, and Glenn Beck. I think Lindsey fired the opening shots a couple of weeks ago, and now the conservative world is taking sides.

Instead of standing up for what is right, we are dealing with thousands of lemming conservatives who evidently take their marching orders from people who are connected to some very nasty agendas. Until we manage to limit the influence of these people, being a “conservative” is akin to nothing more than a bad joke.

If these people and their agendas are not marginalized, once again, we are going to lose entire groups of voters, the way we did Hispanics.

I’m beginning to wonder if these people are “conservative” at all, but rather working hand in hand with liberals to destroy the country. Sure looks that way.

I don’t know about you, but I’m tired of it. When I see someone who is trying to manipulate and promote an agenda that is “hate” I call them on it. No one cares, but if we can reach a person every once in awhile, maybe we can defeat these yahoos.

Michelle Malkin writes for Vdare. Vdare features regular articles by the following: Jarrod Taylor of American Renaissance Pat Buchanan, who also is featured in World Nut Daily Steven Sailer Vdare is the brainchild of Peter Brimelow Peter Brimelow’s identical twin brother, John, was once the leader of the National Socialist Party. Malkin is a staunch associate of Robert Stacy McCain. RSM also writes for Vdare. He is a friend of William White one of the leaders of the National Socialist movement. RSM worked with Francis Coombs. Both Coombs and his wife are also close friends with William White. Both Combs and RSM were leading figures at the WTimes. They are all puppets of John Tanton, who is one of the most staunch pro-abortion and pro-eugenics advocates in the world.

There is one thing this bunch has in common. They all claim to worship Reagan, who would turn his back on them if he were still here. They detest John McCain, Lindsey Graham, and George W. Bush. They do their level best to denigrate and destroy the GOP.

Beck As In a Wreck – Is Demigod Nursing POTUS Ambitions?

Glenn Beck is not a conservative. He claims to be a “libertarian”, and is increasingly fawning over Ron Paul. Perhaps one of the best things to happen to the GOP is the beginning of a “blog war” between Little Green Footballs and Robert Stacy McCain. I don’t know exactly what Johnson’s politics are, other than the fact that he is going after specific “hate” sources the way I try to go after anti-immigration sources. I know how I’ve been treated and The Pink Flamingo is not important in the vast galaxy. LGF is.

Glenn Beck is starting a war he may not be able to complete. The “conservative” blogsphere is starting to fall apart, over Beck, Charles Johnson at LGF, and the apologists who constantly side with Robert Stacy McCain. Earlier today at LGF, Johnson said exactly what I’ve been saying, only The Pink Flamingo is not very important and Johnson is. I’m not worth attacking.

“…Don’t take my word for it that American Renaissance is an outright white supremacist hate site; here’s a Google cache link. Go ahead, investigate it for yourself and see the kinds of people with whom Robert Stacy McCain associates.

This is an ongoing disgrace, from which the right wing blogosphere may never recover.

I’ve made my position very clear — I won’t stand with racists and white supremacists, not now, not in the past, not ever. There’s a very bad craziness on the right, and I won’t have any part of it….”

Did Pat Buchanan Finally Go Too Far This Time?

“…A veteran of World War I who had seen the tattered bodies of his fellow soldiers lying in the trenches, …Read the Rest