The Duggar scandal grows worse, on a daily basis.  In a cold-blooded, and calculated way, it is quit fascinating.  One …Read the Rest

UPDATED: How’s That White Supremacist Thing Workin’ Out for You?

UPDATE:  Rand Paul’s white supremacist leaning aid, Jack Hunter, has basically been thrown under the bus, resigning to become a …Read the Rest

Over the next few days, The Pink Flamingo will be working on several posts about the war against women in …Read the Rest

Are you a little annoyed with the polling about the Tea Parties?  The Pink Flamingo is.  I thought I would …Read the Rest

While you are reading the post, please consider playing the Welcome Back Kotter theme!  Tom Tancredo is running for governor …Read the Rest

UPDATED:The SPLC, Patriot Groups, and Protesting a Little Too Much

UPDATE:  Robert Stacy McCain is back at the WTimes. Makes you wonder about the whole “conservative” movement, doesn’t it?  Or …Read the Rest

Have you heard of the The Far Right Cult of Republican Submission? UPDATE: It appears Glenn Beck has finally angered …Read the Rest

Way much fun. It could be possible that NORMAL Republicans such as The Pink Flamingo are starting to fight back …Read the Rest

NOTE: If The Pink Flamingo were still living in SC and involved in SC GOP politics, I would be advocating immediate and swift retaliatory action against the Charleston County GOP. The reprehensible actions against Lindsey are one reason. Most importantly is their endorsement of the Tea Party Patriot?s who are in the process of calling the shots in Charleston County.

“…A local group of conservatives from the Tea Party Organization, 9.12 and members of the Charleston GOP met and interviewed candidates for local races. They have made the following recommendations for local offices which we support. These candidates have been identified as conservative candidates for these local non-partisan elections. We are asking your support of these individuals through volunteer efforts or cash donations. Please pick one and help them get elected…”

The Tea Party people have submitted a list of acceptable local Tea Party people who are “pure” enough to be endorsed by the county Executive Committee for local offices. In other words, the Charleston County GOP is being run by Glenn Beck’s 912 group of “patriots” and not by actual Republican values. This is reprehensible. The SCGOP should demand the resignation of all local officers involved in this fiasco. The problem is, right now, Republicans are quaking in their boots because Glenn Beck is now the most powerful man in the GOP.

How dare these people censure Lindsey. It is not about “patriotism” but the revenge of Ron Paul Bots and Glenn Beck’s little minions.

“…”When I began entering into the give and take …, a lot of the most radical conservatives who had supported me during the election didn’t like it. “Compromise” was a dirty word to them and they wouldn’t face the fact that we couldn’t get all of what we wanted today. They wanted all or nothing and they wanted it all at once. If you don’t get it all, some said, don’t take anything. “I’d learned while negotiating union contracts that you seldom got everything you asked for. And I agreed with FDR, who said in 1933: ‘I have no expectations of making a hit every time I come to bat. What I seek is the highest possible batting average.’ “If you got seventy-five or eighty percent of what you were asking for, I say, you take it and fight for the rest later, and that’s what I told these radical conservatives who never got used to it….” 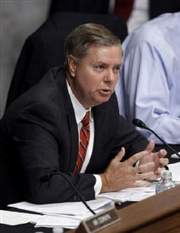 “I love this party. I’m not going to be let it be hijacked by Ron Paul.” 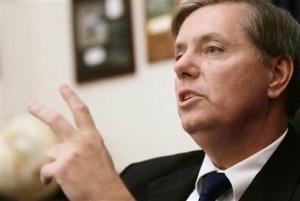 Funny how the far right doesn’t like Republicans who stand up for the GOP. I guess that says something, doesn’t it. The Palmetto Scoop covered the whole Monday Night Ron Paul, Constitution Party, Libertarian hate-fest. Naturally, the usual hate-Lindsey far right crowd will NOT tell the truth about what happened Monday night, which says a lot about them. Naturally Hot Air has managed to slam Lindsey while explaining about the entire event.

“…The knuckledragger brigade was out in full force Monday night at a health care reform town hall held by U.S. Sen. Lindsey Graham at Furman University in Greenville.

During the 75-minute forum, the boisterous crowd grilled Graham for having common sense and not blindly following the rhetoric of right wing reactionaries.

At one point, an older woman stood up and made some prolonged statement about state’s rights and the Constitution while the crowd predictably cheered her on. The woman ranted at length about “unconstitutional, anti-Christ, socialist, federal, deficit-spending programs” and told Graham that “God does not compromise.” Whatever that means.

Graham responded by asking her how she’d voted for president, and –shockingly — she said she voted for Constitution Party wacko Chuck Baldwin. Also shockingly, nearly all of the ideologues in attendance gave a rambunctious round of applause.”…”

“…Interestingly, on his Facebook page, Frank lists his activities as “Sitting on my butt and collecting unemployment as long as I can!” Gee… what a surprise…”

Listen to the video, it is a thing of beauty. Lindsey tells them off, and pulls out the information that the people making all the problems are NOT Republicans.

“…One man told Graham he had “betrayed” conservatism and made a “pact with the devil” by working with Democrats, and asked when Graham would switch parties. Graham said he’s not going anywhere and instead would grow the party, defending his conservative credentials on such issues as abortion and guns, and calling the view of Libertarians who believe President Bush was a war criminal “nuts.” “We’re not going to be the party of angry white guys,” Graham said to more shouts. A woman who had been carrying a sign that condemned “unconstitutional, anti-Christ, socialist, federal, deficit-spending programs” told Graham “God does not compromise” and that he had violated his oath of office by supporting federal ideas, including health care reform that overstep states’ rights….”

He then called Libertarians “nuts”!

“…Despite being on the defensive much of the time, Graham held his ground on the issues, defending his conservative credentials as well as his support for the climate change bill. When asked about the view held by some Libertarians that President Bush committed war crimes, Graham didn’t mince words, calling the view “nuts.” His response garnered shouts and boos…”I’m not going to leave the Republican Party,” Graham said when one questioned asked him why he hasn’t yet joined the Democrats. “I’m going to grow it. We’re not going to be the party of angry white guys.”

His comments were met with a salvo of boos and shouts of “Ron Paul!”

“I love this party,” he responded. “I’m not going to be let it be hijacked by Ron Paul.”

Graham emphasized his conservative bona fides — particularly his record of opposing abortion rights and support of gun rights — but said GOP needs to build a broader coalition. Otherwise, he warned, those trying to purify the party will turn Congress over “to the most liberal people in the world because somebody disagrees with you.”

“I’m going to find people in Maine, Delaware, Illinois and other places that can win,” he said. “And I’m going to help them, and we’re going to move this party and this country forward. If you don’t like it, you can leave.””

How Fake Glenn Beck, Ron Paul “Libertarians” Are Trying to Destroy the GOP

The old fashioned, true believer Libertarians I’ve known appear to have absolutely nothing to do with the “conservative” Ron Paul version of Libertarian. Old fashioned Libertarians were left-over hippies, former stoners, and were all about the legalization of marijuana. Some were very pro gun. Then there were the anti-military former Dems who felt the Democratic party was no longer liberal enough.

It was not about culture. It was not about Ron Paul. It was not about “the Constitution”. They were not about denigrating various politician. It was all about NOT being involved, not getting one’s political act together, and tilting at wind-mills. Their cause was romantic. They had a few good ideas, but a true Libertarian is so akin to an anarchist that the very act of attending a political meeting, a national convention, or actively promoting a candidate or agenda is simply not possible.

Any resemblance to the intolerant, bigoted (politically bigoted) bunch of lying, Ron Paul loving, Glenn Beck swilling, Robert Stacy McCain holier than thou sore-heads some of whom are advocating the violent overthrow of various elected officials who don’t agree with their extremism, is purely coincidental. They are now reaching the point where some of them are advocating a second revolution, civil war, and the actual lynching of politicians who do not agree to their emotional black-mail, both Democrats and Republicans.

You may notice that The Pink Flamingo has deleted the Pro-Sarah Palin blog roll Read My Lipstick from her blog. …Read the Rest

The Conservative War Against Lindsey Graham (and the GOP)

“…“I have no desire to be up here in an irrelevant status. I’m smart enough to know that this country …Read the Rest

Obama & Conservatives Back GOP Into Corner

Do you remember back, once upon a time, when we had a great POTUS?  Remember how the Dems went after …Read the Rest

BREAKING: A Tea Party I Told You So – White Supremacist Connections Proven!

LGF has news that White Supremacists like American Renaissance are planning to recruit during the July 4 Tea Party Event. …Read the Rest

There are times when you just can’t help but be quite proud of your elected officials and all the time, …Read the Rest

On Saturday, Rush Limbaugh said the following at CPAC: “…”We conservatives have not done a good enough job of just …Read the Rest

Some liberal made fun of CPAC by comparing it to a Star Trek convention.  You know, that made me mad.  …Read the Rest

How Paul Weyrich Betrayed Reagan, Then Lied About It

Will Conservatives Ever Learn How to Behave?

Conservatives are crying about “rebuilding the conservative movement”. You don’t win elections that way. We need to concentrate on the GOP and learn how to win again!

How to Destroy a Good Man’s Character With Debunked Lies

THE REEK OF DESPERATION Dr. Jack Wheeler, the Jack Armstrong of the “Reagan Era” has penned one of the most …Read the Rest

Borderline Republican Disorder & the Terrifying Roots of the Anti-Immigration Movement

James Hood is a treasure. (Give his new blog a break) He’s come up with more information connecting Tanton, Garrett …Read the Rest