A Quickie Primer on Christian Reconstruction 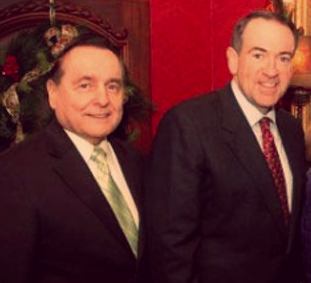 Once again, the Gothardites are at it, trying to take over the world.  I thought it would be a good idea to have a quickie primer on who, what, when, where, and why.  To begin with, it is a cult, a very nasty cult.  It is a new religion.

Christian Reconstruction was invented by R. J. Rushdoony, who was tight with Robert W. Welch, Jr, who was one of the founders of the John Birch Society. One of the other founders of the JBS was Fred Koch, father of Chuck & Dave. Rushdoony patterned his version of the world after the JBS. Basically ultra libertarian, he created his own version of ‘Christianity’, drawing in his original devotees of Larry Pratt, Phyllis Scholarly, and so forth and so on. (Does any of this sound familiar?) Rushdoony’s heresy is based on the idea that his version of ‘Christianity’ will have Dominion over the earth, with the Calvinist elect taking orders directly from God. They will then pass these orders on to those who follow them. Those of us who don’t, will eventually be either sold into slavery or executed. Rushdoony detested democracy. Eventually, when his followers take control, any of us who refuse to follow his John Calvin form of dictatorship, will be executed for heresy.

His two most important followers, disciples are Bill Gothard (whom I think is the most powerful person in the history of this country – for many reasons) and “Scary Gary” North. Bill Gothard is the is tight with Hobby Lobby‘s David Green, who is fronting for Gothard’s ‘character first’ brainwashing. We’ve only recently learned that the Koch Machine is helping to pay for all of this. They are in the process of brainwashing – is in absolute obedience – the entire US military machine, and the vast majority of law enforcement agencies in the country. According to my research, there is a correlation between the ‘character counts’ brainwashing and police atrocities. Gothard’s other disciples include Jim-Bob Duggar and Mike Huckabee.  We should note that Gothard is also a sexual pervert.

Rushdoony’s son-in-law, “Scary” Gary North, also a big-time libertarian, is the brains behind Ron Paul’s political machine. The same holds true of little Rand. Scary Gary has a list of things for which people will be executed: Heresy (anyone who doesn’t believe what they are told to believe), witchcraft, pre-marital sex, a woman not being a virgin, disobedient children, incest, rape of a virgin, democracy, murder, theft, and so forth and so on, including abortion, and having a child out of wedlock. That child be auctioned off to the highest bidder as a slave. The mother will be stoned to death. There is no penalty for pedophilia.  It is a highly racist agenda.  There is a very good reason for the racism.  Rushdoony thought blacks were inferior.  There is a very good reason why the GOP looks so racist today.

Currently, the ideology basically controls the state of Oklahoma, They’re big in Louisiana, Arkansas, Mississippi, and have made inroads into Iowa, Minnesota, and anywhere that has a large religious vote. Don’t ever mistake what they believe for what we ‘normal’ Christians believe. It is not. Oh, once upon a time, it was, but Rushdoony’s strange and heretical teachings and Bill Gothard’s strangeness have completely tainted entire denominations such as the Southern Baptists, which don’t even resemble what they once were. They’ve tried taking over the Methodist denomination but are rebuffed. They’ve destroyed the Presbyterians and have done a good job ruining certain branches of the Lutheran church.

Don’t ever think all of this was not planned. Rushdoony began his 100 year agenda in the early 1960s. His disciples like Gothard and North have done a very good job spreading the propaganda. Gothard has so screwed with people’s minds and their faith that they don’t know what they believe. They have become a massive cult, with a tremendous amount of money backing them. They are also infinitely corrupt. Nothing else matters but bringing about God’s Dominion, with godly men in charge of us all. Women need not apply.